TMS announced on Thursday that it is producing a new cel-shaded CG crossover anime titled Lupin III vs. Cat's Eye, which will debut worldwide exclusively on Amazon Prime Video in 2023. The announcement did not reveal the length of the anime. 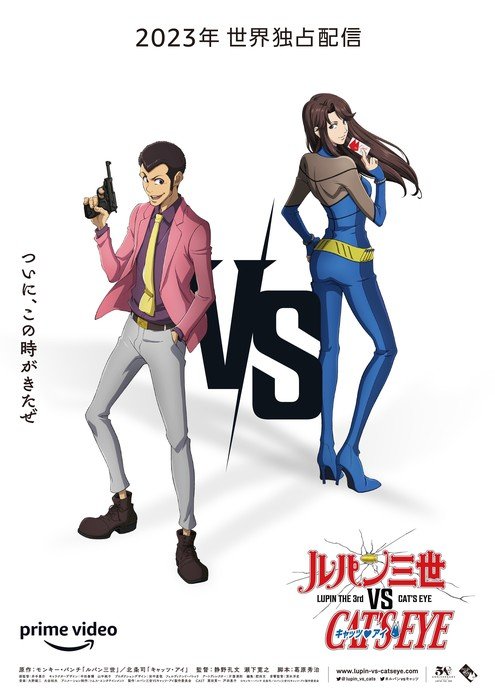 The new project celebrates both the 50th anniversary of the Lupin III anime, and the 40th anniversary of Tsukasa Hojo's Cat's Eye manga. The anime will be set in Cat's Eye's original 1980s time period. The Cat's Eye sisters are again aiming to steal three paintings that once belonged to their father, but this time, Lupin is after the same catch. But the paintings will also reveal a long-buried mystery.

Kanichi Kurita and Keiko Toda both reprise their roles as Lupin III and Hitomi Kisugi, respectively.

The latest installment of the franchise, the Lupin the 3rd Part 6 television anime series, premiered on the NTV channel in Japan in October 2021. Sentai Filmworks licensed the new series for home video and streaming in North America, Australia, New Zealand, Scandinavian countries, and all Nordic Countries.

Tsukasa Hojo's Cat's Eye manga center on three sisters who run a cafe by day, and are notorious art thieves by night. The manga ran from 1981 to 1985, and inspired two television anime seasons by Tokyo Movie Shinsha. The first 36-episode season aired between 1983-1984, and the second 37-episode season aired from 1984-1985.