Let's Make a Mug Too Anime Gets 2nd Season in October

The official website for the television anime of the city of Tajimi's promotional manga Yakunara Mug Cup Mo (Let's Make a Mug Too) confirmed on Monday that the series will get a second season titled Yakunara Mug Cup Mo Niban Kamo (Let's Make a Mug Too: Second Kiln) in October on the CBC TV, BS11, TOKYO MX, MBS, and AT-X channels. The main cast and staff are returning for the new season. The website shared a commemorative visual: 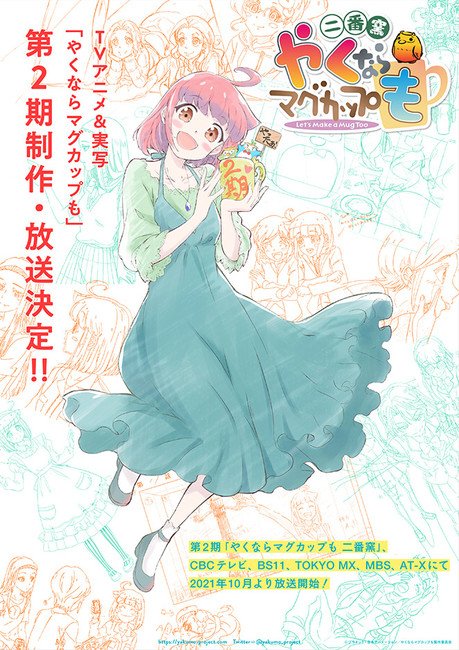 The 12th and final episode of the first part aired on Monday. 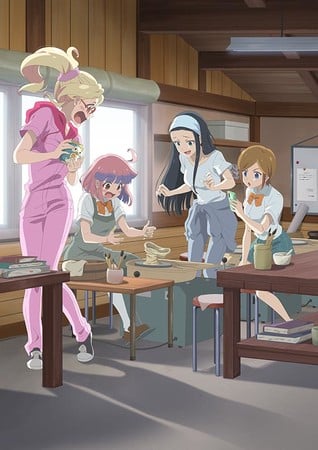 The cast includes Minami Tanaka as pottery novice Himeno Toyokawa, Yū Serizawa as Himeno's classmate and the pottery club's mood-maker Mika Kukuri, Yūki Wakai as the anime and game fan Naoko Naruse who spends all her time at the club for some reason, and Rina Honnizumi as the club president Toko Aoki who has enjoyed pottery since she was little. Other cast members include Kaito Ishikawa as Himeno's father Tokishirō Toyokawa, Rin Mizuhara as Himeno's grandmother Sachie Tokikawa, and Mana Ogawa as ceramics club adviser Mami Koizumi.

Haru Miyachi and Nendo Tsumura play students who attend pottery club at a different school from the main characters. They received the parts following an audition of over 2,000 applicants.

Jun Kamiya (Blue Seed, The Third: The Girl with the Blue Eye, Kingdom) is directing the anime at Nippon Animation. Naruhisa Arakawa (Active Raid, Twin Star Exorcists, This Art Club Has a Problem!) is writing and supervising the series scripts. Ayano Yoshioka is designing the characters and also serving as the chief animation director. Tajimi and its tourism association are both collaborating on the anime.

The city of Tajimi, located in the southern part of Gifu Prefecture, Japan, is famous for Mino earthenware. The city is dotted with historical pottery producers and ceramic art museums. It has facilities where you can try your hand at making pottery, and many restaurants that serve food on Minoware dishes.

The story begins when a high school girl moves to a shopping street in Tajimi. Many encounters await her, friends, town folk, ceramic art, etc. What will she discover in a town famous for ceramic?

The manga launched in 2012, and updates four times a year. The manga also has a four-panel spinoff manga titled Naoko no Kobachi. A separate manga adaptation for the anime launched on Akita Shoten's free manga website "Manga Cross" on January 28. Original creator Osamu Kashiwara is writing the story for the new manga.