These, the new anime of Yoshiki Tanaka's epic science fiction novels Legend of the Galactic Heroes, began streaming the first five minutes and 30 seconds from the first part of the anime's third season on Thursday. 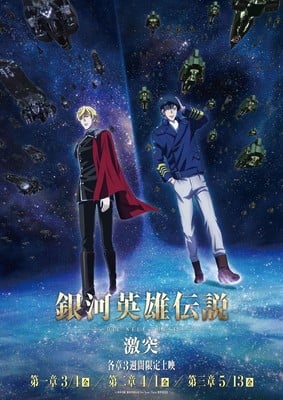 The season will debut as features in theaters (similar to previous seasons) under the title Legend of the Galactic Heroes: Die Neue These Gekitotsu (Clash). The season's three theatrical features will open in Japan on March 4, April 1, and May 13, respectively. The third season will then run on television for 24 episodes (numbered as episodes 25-48 in the overall series).

The first season, The Legend of the Galactic Heroes: Die Neue These Kaikō (The New Thesis: Star-Crossed), aired as a 12-episode series that premiered in April 2018. Crunchyroll streamed the series as it aired in Japan, and Funimation streamed an English dub.