The series is collaborating with Kasugai City in Aichi prefecture, which is also known as the "Cactus Town" and is a leading cactus producer. The collaboration will feature the game's Li'l Cactus mascot character.

The anime will premiere on the Super Animeism programming block on MBS, TBS, and their affiliates on October 7 at 25:25 (effectively October 8 at 1:25 a.m.). 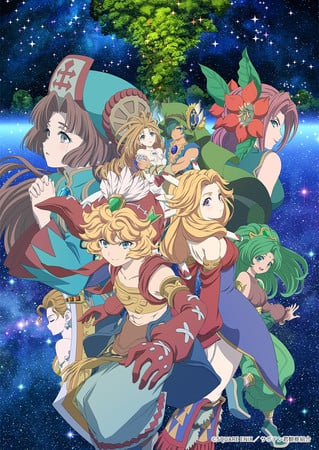 Masato Jinbo (Fate/kaleid liner Prisma Illya 2wei Herz!, Restaurant to Another World) is directing the series and is in charge of series composition. Taro Ikegami (Lapis Re:LiGHTs) is designing the characters based on the original designs by HACCAN (Secret of Mana remake, The Legend of Heroes: Trails in the Sky). Yoko Shimomura (Legend of Mana game, Kingdom Hearts) is composing the music.

Graphinica and Yokohama Animation Lab are producing the anime. The two studios previously collaborated to produce the opening cinematic movie for the remastered version of the Legend of Mana game.