The anime studio Khara posted a notice on Saturday about the unauthorized recording and uploading of footage from Evangelion: 3.0+1.0: Thrice Upon A Time (Shin Evangelion Gekijō-ban :||), the "final" Evangelion film which opened in Japan on Monday. Khara posted the notice on behalf of itself and the film distribution companies TOHO and Toei.

Khara reported that footage from the film can be viewed online, and noted that the unauthorized recording of films in theaters is a crime in Japan, under the Act on Prevention of Unauthorized Recording of Films. The studio added that uploading such footage to YouTube, Twitter, Facebook, and other services are also copyright violations. People who violate the unauthorized recording law and Japan's general Copyright Law face up to 10 years in prison, up to 10 million yen (about US$90,000) in fines, or both.

Khara said that it will prosecute violators to the full extent of the law. The studio added that charges have already being filed in a similar case that occurred in July 2018. Suspects were arrested or charged under the law for recording in theaters from Space Battleship Yamato Resurrection in 2010, Mobile Suit Gundam 00 the Movie: A Wakening of the Trailblazer in 2011, Magical Girl Lyrical Nanoha the Movie 2nd A's in 2012, and The Wind Rises in 2014. 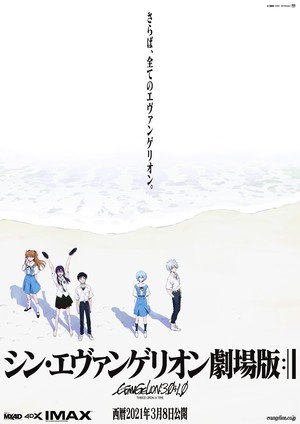 The staff had delayed the film from January 23 to March 8, after careful consideration due to the new state of emergency declared in four prefectures in Japan on January 8, and then extended to a total of 11 prefectures.

The film had an earlier delay due to concerns over the new coronavirus disease (COVID-19) and its spread inside and outside of Japan. The film was originally scheduled to open in Japan on June 27, 2020.