The Kaguya-sama wa Kokurasetai on Stage: Shuchiin Ongakutan special event announced a third anime season and original video anime for Aka Akasaka's romantic comedy manga on Sunday. The original video anime is scheduled for a 2021 release. The event also unveiled an announcement promo. 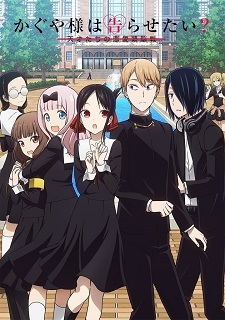 Akasaka began the manga in Miracle Jump in May 2015 and switched it to Young Jump the following March. Shueisha published the 19th volume on July 17, with the 20th volume scheduled for a November 19 release. Kaguya-sama wa Kokurasetai has a cumulative 13 million copies of its compiled volumes in circulation.

The first season aired in Winter 2019, roughly covering the first five volumes. Aniplex of America licensed the anime and simulcast it on Crunchyroll, Funimation, and Hulu. The company also released the show on home video on February 18. The second season premiered on April 11 and ended on June 27, adapting up to volume ten. Funimation exclusively simulcast the second season and subsequently began streaming an English dub.

VIZ Media licensed the manga in English under its Shonen Jump imprint in February 2018 and published the 16th volume on September 1. The 17th volume is scheduled to go on sale on November 3.

Shinta Sakayama (Hitsugi no Chaika) began drawing the Kaguya-sama wa Kokurasetai: Doujin-ban spin-off in Tonari no Young Jump in June 2018 and ended it on June 25. G3 Ida launched a second spin-off, Kaguya-sama wo Kataritai, in Young Jump in July 2018. Shueisha shipped the fourth and final volume of Doujin-ban and the second volume of the second spin-off on March 19.