Futabasha's Comic Action website published a new chapter of Ichigo Takano's Orange manga on Friday. The new chapter focuses on Azusa Murasaka. Takano posted an image on Twitter (pictured at right) for the new chapter on Friday, noting that the chapter is the first new work in Orange in four years.

Takano (Dreamin' Sun) launched the original shōjo manga in Shueisha's Bessatsu Margaret magazine in 2012 and moved it to Monthly Action in 2013. The manga ended in August 2015, and Futabasha published the fifth and final main story compiled book volume in November 2015. Crunchyroll released the manga in English digitally. Seven Seas Entertainment published the original manga in North America as two omnibus volumes, and it describes the manga's story: 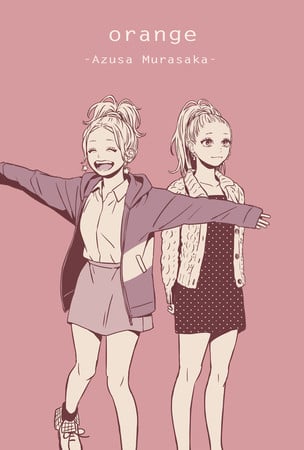 Everyone has regrets in life. So who wouldn't take the chance to change the past if given the opportunity? When sixteen-year-old Takamiya Naho receives a mysterious letter, claiming to be from her twenty-seven-year-old self, her life is suddenly thrown into flux. The letter tells her that a new transfer student by the name of Naruse Kakeru will be joining her class, and to keep her eye on him. But why? Naho must decide what to make of the letter and its cryptic warning, and what it means not only for her future, but for Kakeru's as well.

While the manga's main story has been compiled in the previous five volumes, the sixth volume compiles Takano's adaptation of the Orange -Mirai- (Orange Future) anime film. The volume also features the Orange -Suwa Hiroto- two-part spinoff manga, which focused on Suwa in an alternate future. The volume shipped in Japan in May 2017, and Seven Seas Entertainment released the volume in January 2018. The sixth volume had revealed that the manga would get a seventh volume, and that seventh volume will be the true final volume of the manga.