The anime premiered on AT-X, Tokyo MX, BS SkyPer!, and BS11 on July 4. Sentai Filmworks licensed the anime, and HIDIVE is streaming the series as it airs in Japan.

"The world is on the brink of apocalypse following an onslaught of invaders. To fight the attacking hoard, one of the original Getter Robo pilots, Hayato Jin, has finished Getter Arc, a new fighting unit based on the final work and ultimate masterpiece of Professor Saotome. Now the son of Ryoma – one of Hayato's copilots on the first-generation Getter – Takuma, the half-human half-Saurian Kamui, and Baku, younger brother of the extraordinary ESPer Tahir, step aboard the Getter Arc to combat the ruthless incursion and restore hope to their ravaged world!"

Ishikawa ran the manga in Futabasha's Super Robot Magazine beginning in 2002, and it remains unfinished after Ishikawa's death in 2006. Futabasha published three compiled book volumes for the manga. 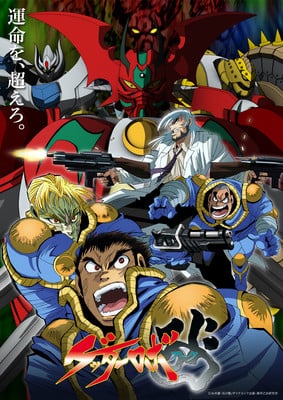