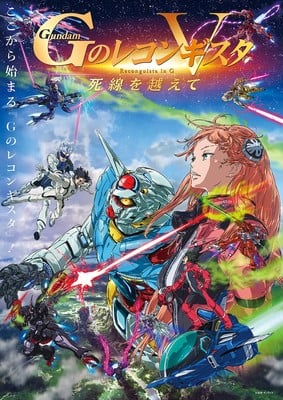 The anime's fourth and fifth films will open in Japan on July 22 and August 5, respectively.

The fifth film is titled Gekijōban Gundam G no Reconguista V: Shisen wo Koete (Crossing the Line Between Life and Death).

Sunrise producer Hisakazu Naka revealed in August 2021 that "at least half" of the upcoming fourth film will feature new story material, and asked fans to look forward to a "different feeling" from the original television anime.

The first film, Gekijōban Gundam G no Reconguista I: Ike! Core Fighter (Go! Core Fighter), opened in Japan in November 2019. The film screened in 22 theaters in Japan for two weeks. The film ranked at #1 in the mini-theater rankings for its two weekends.

Gekijōban Gundam G no Reconguista III: Uchū kara no Isan (The Legacy of Space), the third film in the series, opened in Japan in July 2021.

Right Stuf released the Gundam Reconguista in G television anime series on Blu-ray Disc in North America in October 2016, and it describes the story:

The new era begins!
The turbulent era known as the Universal Century has ended. Now, mankind looks towards prosperity and peace in the new era known as the Regild Century (R.C.). One of the most important resources in this era is the Capital Tower - a space elevator which towers over the land connecting Earth to space. Its purpose, to transport the Photon Batteries the Earth relies on for power. It is worshiped as a holy place.
Tasked with protecting the tower, one day on a practice mission, young Capital Guard cadet, Bellri Zenam is attacked by a high-performance G-Self Mobile Suit. Despite having never before encountered the G-Self, he feels a strange connection to it and its pilot, a space pirate called Aida Surugan.
Little does Bellri know that he is about to uncover truths which will shake the entire Regild Century.

Gundam Reconguista in G celebrated the Gundam franchise's 35th anniversary, and marked the first return of franchise creator Yoshiyuki Tomino as chief director of an original Gundam series since Turn A Gundam. After a theatrical premiere of the first three episodes in August 2014, the anime premiered on Japanese television in October 2014.