'Goodbye, Don Glees!', The House of the Lost on the Cape Films Compete at Annecy This Year

This year's Annecy International Animation Film Festival announced on Tuesday that both Atsuko Ishizuka and Madhouse's Goodbye, Don Glees! anime film and Shinya Kawatsura and david production's The House of the Lost on the Cape film are screening in competition at this year's event in the Official Feature Films category.

Goodbye, Don Glees! opened on February 18. The story centers on two boys named Rōma and Toto. The boys meet when Rōma moves from Tokyo to the countryside, which he cannot grow accustomed to. But when he meets Toto, they become a duo, naming themselves "Don Glees." Eventually, Toto was supposed to move out to Tokyo for school, but on the summer of their first year of high school, they meet Drop, a new addition to Don Glees, who invites them to "view the world from above." When Rōma and Toto follow Drop, they become involved in a forest fire that gets blamed on them, and go off in search of a missing drone that has evidence of their innocence. A small incident becomes an important, life-changing journey that culminates in Iceland.

The film is Ishizuka's first original anime film. Ishizuka commented that the film is set in Iceland, saying that "after reaching Antarctica" in her previous anime A Place Further Than the Universe, she opened a map and looked for the opposite extreme from Antarctica. 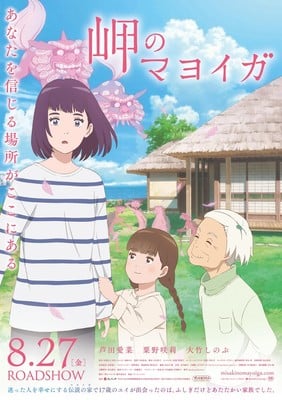 The House of the Lost on the Cape opened in August 2021. The story centers around a traditional Japanese house named "Mayoiga" (named after the Japanese folkloric concept of an abandoned yet well-kept home) from where one can see the sea and feel the touch of warmth and nostalgia. Here, a 17-year-old girl named Yui who is trying to find her place in the world begins a new life with people completely unrelated to her.

Established in 1960, Annecy is the world's oldest and largest animation film festival. This year's event will run from June 13-18 in the French town of the same name.