Funimation announced on Monday and Tuesday that it will stream Kaginado, the first crossover anime series featuring the franchises by Visual Arts' Key brand, and Visual Prison, the original television anime from Uta no Prince Sama and Symphogear series creator Noriyasu Agematsu and Aniplex's A-1 Pictures, as part of its fall 2021 lineup. The company also added the anime based on Gege Akutami's Jujutsu Kaisen manga on Monday.

Jujutsu Kaisen will stream in the United States, Canada, the United Kingdom, Ireland, Australia, New Zealand, Mexico, Brazil, Colombia, Chile, and Peru. It will stream with subtitles and with dubs in English, Spanish, Portuguese, French, and German.

Funimation will simulcast Kaginado in the United States, Canada, the United Kingdom, Australia, and New Zealand as it airs in Japan, as well as Mexico, Chile, Colombia, Peru, and Brazil with simulcast dates to be confirmed.

Kazuya Sakamoto (Tabi-Hani) is directing the anime at LIDEN FILMS Kyoto Studio. Takashi Aoshima (Rewrite episode script writer) is the chief writer, and is penning the scripts alongside KAI and Tōya Okano. Eriko Haga is designing the characters. Kazunari Araki is credited for prop design. Yukihiro Shibutani is the art director, while Asami Kitsukawa is the color designer. Tomoaki Suzuki is the compositing director of photography. Kazuo Kajikawa is credited for editing. Akane Maeda is the sound director. Tohoku Shinsha Studio is credited for sound production. Visual Arts/Key is credited for the music.

The chibi-character anime will be a crossover of some of Key's most popular visual novel and anime titles, including Kanon, Air, Clannad, Little Busters!, Rewrite, and planetarian. 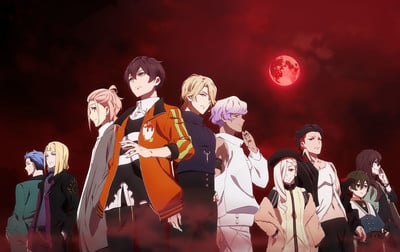 Funimation will simulcast Visual Prison in the United States, Canada, the United Kingdom, Australia, and New Zealand as it airs in Japan, as well as Mexico, Chile, Colombia, Peru, and Brazil with simulcast dates to be confirmed.

The anime will premiere on Tokyo MX, Gunma TV, Tochigi TV, and BS11 on October 8; on ABC TV and Nagoya TV on October 9; and on WOWOW on October 13.

Aniplex describes the project as portraying visual kei musicians as vampires. The visual kei genre is a subgenre of Japanese rock characterized by elaborate visual presentations, gothic aesthetics, balladic melody writing, and musicians who present androgynously. In the anime's story, vampires perform visual kei music, and gather together in Harajuku in an event known as "Visual Prison" under a red moon once a year, performing visual kei songs to entrance an audience and offer the best song to the red moon above.

The story begins when Ange Yuki, a lonely boy with no family, travels to Harajuku to see his favorite artist, and there sees an intense musical battle between the bands Eclipse and Lost Eden, their energetic performance striking a pain through his heart.

Takayuki Kidou is designing the props. Hiroshi Katō is supervising the art with Hirofumi Sakagami as art director. Katō and Mitsuki Maeda are also serving as art designers. Kanako Hokari and Mayu Morita are the color key artists and Ryuta Undo is directing the CG. Akito Suzuki is the compositing director of photography, and Eiichi Nishimura is editing. Satoshi Motoyama is directing the sound. Elements Garden is producing the music. Akutami launched the manga in Shueisha's Weekly Shonen Jump magazine in March 2018. Shueisha published the manga's 16th compiled book volume on June 4. The manga has over 50 million copies in circulation.

The manga went on hiatus beginning with the Weekly Shonen Jump's 29th issue on June 21 due to Akutami's poor health. The magazine will announce when the manga will return at a later date once Akutami has sufficiently recovered

Viz Media published the manga's first three chapters in English simultaneously with Japan as part of its Jump Start initiative. When Viz then switched to its new Shonen Jump model in December 2018, the company began publishing new chapters of the manga digitally. Shueisha is also publishing the manga on its MANGA Plus website.