Fruits Basket: The Final Season Episode 9 is weapons-grade tearjerker material. Episode 8 was intense enough, with Kyo explaining his trauma, rejecting Tohru's love and abandoning her just as Akito arrives with a knife, but Episode 9 more than keeps up that momentum with major character breakthroughs and a balance of powerful hope and intense pain -- two emotions that prove to be interconnected. Akito is out for Tohru's blood, but even with the mentally deteriorating "god" of the now-disintegrating zodiac slashing at her arms, Tohru can't help but be incredibly empathetic. Tohru realizes she understands Akito's desire to be loved and her fear of shattered familial bonds because Tohru is herself struggling with the same emotions. Tohru's empathy disarms Akito, who runs away confused and upset but Tohru follows and continues to reach out for her. The idea that Tohru is willing to be Akito's friend even after all that proves enticing to Akito, who might just be able to become a better person even after all of her horrible actions.

If Tohru's offer of friendship inspires tears because of how hopeful it is, what happens next inspires tears of pain. Before Akito can respond to Tohru, Tohru falls from the edge of a cliff and badly hurts her head. This is the sort of plot development that could have been contrived but has actually been built up to since the very first episode of Season 1; landslides on the Sohma property already destroyed Tohru's tent, and now the story comes full circle with another landslide in the same location injuring Tohru herself. Though Tohru isn't dead, Kyo's nightmare has in a sense come true. 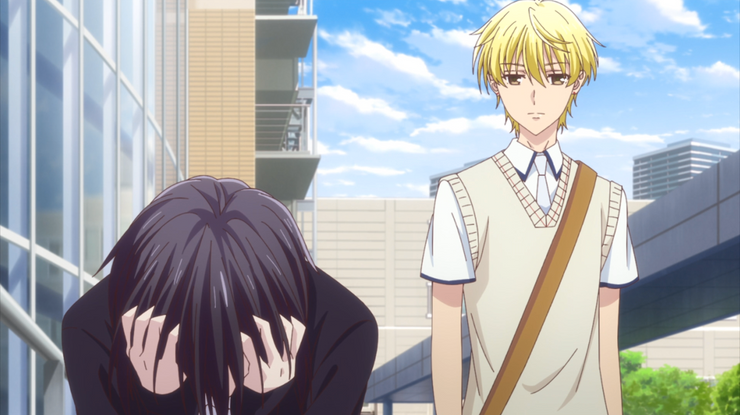 Tohru is taken to the Sohma family hospital, where Kureno is also recuperating from his stab wound. Outside the hospital, Akito talks with Momiji about visiting them. While Akito wasn't directly responsible for Tohru's major injury, she still hurt Tohru, and she's absolutely guilty of injuring Kureno. That the rest of the Sohma family isn't even punishing Akito feels even worse for her than any formal punishment would.

Momiji, for his part, continues to have a strong sense of boundaries; he can talk to Akito like an adult, but he's never going to forgive her or be her friend. He can, however, impart his wisdom to her. Akito might see Tohru and Kureno as "idiots" for being so forgiving, but Momiji encourages Akito to shift her perspective by telling her the story of the foolish wanderer. If Akito is ever going to be a better person, she needs to embrace the few selfless people who are willing to give her a second chance. Sure enough, Akito ends up visiting both Kureno and Tohru in the hospital. Second chances are possible.