The official website for the Neon Genesis Evangelion franchise revealed on Tuesday that the Blu-ray Disc and DVD releases for Evangelion: 3.0+1.11: Thrice Upon A Time (Shin Evangelion Gekijō-ban :||), an updated version of the Evangelion: 3.0+1.0 film, will include a bonus video titled "Evangelion: 3.0 (-46h)" when it ships in Japan on March 8, 2023. King Amusement Creative streamed a commercial for the home video releases:

The film ended its theatrical run last year with a bonus pamphlet featuring a similarly named "Evangelion: 3.0 (-120min.)" manga short. The manga short depicts the events that occurred 120 minutes before the previous film, Evangelion: 3.0 You Can (Not) Redo.

Studio Khara confirmed on Twitter that it is currently producing the bonus video.

March 8, 2023 marks the second anniversary of the film's opening in Japanese theaters. 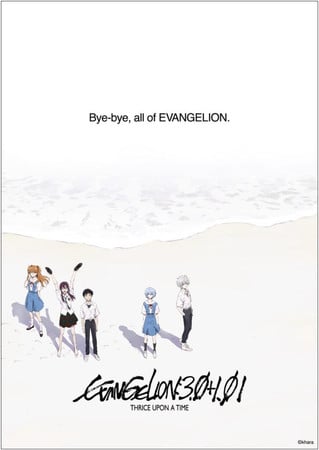 The film opened in Japan on March 8, 2021, and ranked #1 in its opening weekend. The film surpassed 10 billion yen (about US$74 million) in the Japanese box office. The film's new Evangelion: 3.0+1.01 version began playing in June 2021 for the film's "last run." The new version contains "minor revisions" to some animation sequences, but does not change the film's story.

GKIDS and Fathom Events will screen the Evangelion: 3.0+1.01: Thrice Upon A Time (Shin Evangelion Gekijō-ban :||) film in Japanese with English subtitles in U.S. theaters on December 6, 8, and 11. Tickets will go on sale on November 2.

Amazon Prime Video is also streaming the Evangelion: 1.11 You Are (Not) Alone, Evangelion: 2.22 You Can (Not) Advance, and Evangelion: 3.33 You Can (Not) Redo films in over 240 countries and territories, including Japan. These versions are the adjusted versions of the films after their original theatrical release. Funimation has released these new versions on home video with its own unique dubs

Shout! Factory and GKIDS launched the Collector's Edition of the Neon Genesis Evangelion television anime and the films Evangelion: Death (True)2 and The End of Evangelion in December 2021 and the Standard Edition Blu-ray Disc set in November 2021. The company began selling digital downloads for the series and films in November 2021.