The official website and Twitter account of the anime adaptation of Kinosuke Naito's Farming Life in Another World (Isekai Nonbiri Nōka) light novel series revealed that the adaptation will be a television anime premiering in January 2023. The series also unveiled a teaser visual: 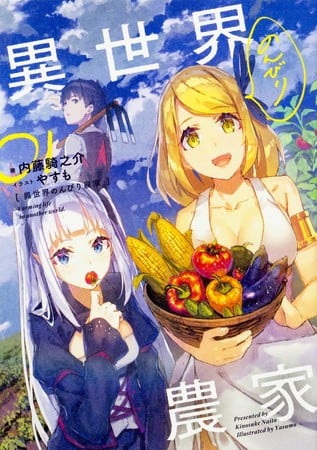 One Peace Books began releasing Yasuyuki Tsurugi's manga adaptation of the novels in November 2020, and it describes the story:

After Hiraku dies of a serious illness, God brings him back to life, gives his health and youth back, and sends him to a fantasy world of his choice. In order to enjoy his second shot, God bestows upon him the almighty farming tool! Watch as Hiraku digs, chops, and ploughs in another world in this laidback farming fantasy!

Naito began serializing the story on the Shōsetsuka ni Narō website in 2016, where it is ongoing. Kadokawa began publishing the novels in print with illustrations by Yasumo (Banished From The Heroes' Party) in October 2017, and will publish the 13th novel on August 30. Tsurugi launched the manga in 2017, and Kadokawa published the ninth volume on April 8. The novel series has 2 million copies in circulation.