The station had already scheduled compilation specials of previous arcs (with some new footage) on September 11, 12, 18, 19, and 23, followed by the unedited broadcast premiere of the Demon Slayer – Kimetsu no Yaiba – The Movie: Mugen Train anime film on September 25. The staff will announce more details for the Entertainment District Arc, such as casting, after the film's broadcast.

The Entertainment District Arc season continues the story from the Mugen Train film as Tanjirō and the others take on their next mission. 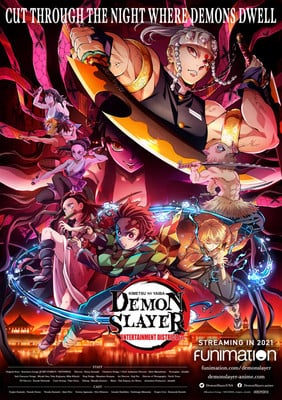 Nakamura explained that Fuji TV decided upon the Entertainment District Arc season's timeslot as one part of its overall decision process for its entire programming schedule. Regarding the story's content set in a red-light district, she said that the anime will go through the usual standards-and-practices review, but the station plans to air the content without changes. She added that Fuji TV received a great response from being able to air a project that became a social phenomenon, in collaboration with Shueisha, Aniplex, and ufotable.

Funimation will stream the new anime season when it premieres this year. Funimation streamed three of the previous compilation specials in Japanese with English subtitles and with an English dub. 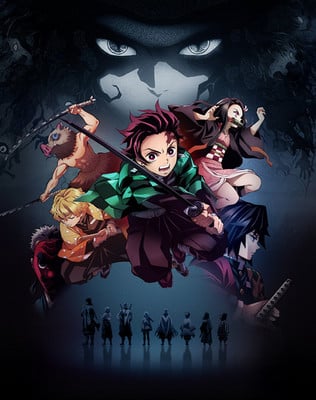 In 45 countries and territories worldwide, Mugen Train sold a total of 41.35 million tickets to earn the equivalent of 51.7 billion yen (about US$475 million) as of May 23. The film was the highest-earning film worldwide from 2020. It is the first non-Hollywood or non-American film to top the yearly box office worldwide since the beginning of cinema over a century ago. The film is now the #2 highest-earning anime film ever at the U.S. box office.

Gotouge launched the manga in Shueisha's Weekly Shonen Jump magazine in February 2016. The manga ended in May 2020. Shueisha published the manga's 23rd and final compiled book volume in December 2020. Viz Media is publishing the manga in English.