Death Note's Musical Is the BEST Way to Enjoy the Story

When you think about a night at the theater, you likely don't think about Death Note, the super-popular anime and manga series that made waves in both Japan and America. However, like many anime and manga franchises, Death Note has had a stage adaptation. And this adaptation is the best way to experience the story and an excellent way to dip your toes into the world of anime musicals.

Death Note: The Musical retells the first arc of the manga, following Light Yagami as he finds the Death Note and goes on a rampage, all while the detective L tries to track him down and put a stop to the murders. However, unlike many other anime musicals, Death Note: The Musical was first written in English. The main script was written by Ivan Menchell, Jack Murphy handled the lyrics and the whole thing was scored by prolific stage music writer Frank Wildhorn. Wildhorn is known for bringing books such as Jekyll & Hyde and Dracula to the stage, so Death Note was a natural fit for him.

The original English script was written in 2013, and then, in 2014, a workshop performance was held in New York. However, while these shows were in English, they were not open to the public. They instead acted as a proof of concept for Korean and Japanese producers. This was followed by a recording session where the cast recorded an album containing 19 of the show's songs as a reference for translators. Once this was done, the international distributors began to arrange performances of the show.

The show opened at the Nissay Theatre in Tokyo, Japan, in April 2015. While this show had both the script and songs translated into Japanese, eight of the songs from the English workshop recording were released online to generate hype for the show. Later in 2015, the show opened in Korea, using a Korean translation of the script. Since then, the show has had many stagings in Japan, the last being performed in 2020. It also had a brief stint in Russia, where it was performed in a concert format. Alas, the show has never been performed in America or in English. However, HoriPro, the company behind the musical, has expressed interest in an international tour and scriptwriter Ivan Menchell has said that an American performance is in the works.

Death Note: The Musical is one of the best ways to experience the Death Note story. The original manga is already extremely dramatic, and the stage musical format enhances that in the best way. The clever use of harmony and dissonance in the songs also gives a unique look at Light and L's rivalry. On top of this, the short runtime means that the action is fast-paced, which keeps the story from dragging. This makes it a great way to dip your toes into the franchise. It is also a great way to get into anime musicals, as while it is based on a Japanese franchise, it is laid out like a traditional Broadway musical.

This accessibility can be attributed to the fact that Frank Wildhorn hadn't heard of Death Note before being approached to do the musical, and he only took the job at the insistence of his son. Thus, the musical presumes that the viewer is also new to Death Note. The musical numbers quickly introduce the world and its characters while drawing the audience into the story and setting. This is something that many manga musicals struggle with, as they presume the audience already knows the story and skip over important details, leaving newcomers out of the loop.

Death Note: The Musical is a must-watch for Death Note fans and those new to the franchise. We can only hope that the American tour ends up happening so more fans can get the chance to experience it and so fans can hear all of the songs in English. Thankfully, due to Death Note's international popularity and the fact that the English script is already written, it seems like an American tour is inevitable. 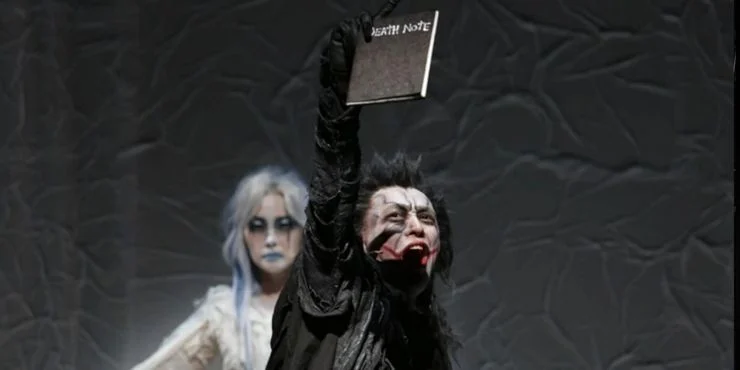