Death Note's first major story arc is ultimately a battle of wits between two people: Light Yagami/Kira and the world's greatest detective, L. But neither was truly alone during this battle. Misa Amane joined Light's side as the second Kira, while L had a team of investigators backing him up.

L usually operates solo, with only Watari providing logistical aid wherever he can. This time though, he had to call upon some allies. L carefully curated a team of trustworthy and loyal detectives to help him and even enlisted the aid of two notorious criminals. This is what it takes to fight for justice in Death Note.

How L & The Police Came Together To Face Kira

Once the Kira case was formally opened in Death Note, L and Watari cooperated with the Japanese NPA to get things started before an information leak quickly caused issues. Before long, L realized that Kira had direct access to police files and data, and thus could outmaneuver him over and over. Worse yet, many police officers mistrust L and investigated him, with L investigating them in return to find the source of the leak.

The two parties were soon at each other's throats, so it was time for a new solution. L launched a passive plan, allowing mistrustful or uninterested NPA officers to quit the Kira case and move on. Soon, only Soichiro Yagami and five other officers remained. L sent a message formally inviting them to join him, and of these six officers, only one, Hideki Ide, opted out. The rest teamed up together, being the most loyal and trusting police officers out of the entire NPA.

L, ever cautious and vigilant, rarely trusted anyone. But now he had no choice, and these five officers had proven themselves ready to take his side no matter what. Having so few officers were on the case also solved the info leak problem, and Kira could easily be traced to one of these five. Indeed, Light/Kira had been stealing info through his father Soichiro, but keeping that up would be far too risky. This was a significant gain for L, and better yet, the new team kept meeting up at various hotels rather than NPA HQ, making it even more difficult for Kira to track them down or attack them. At this point, L also gave his allies fake ID badges and belt buckles with communicators in them, meaning this was no ordinary investigation team. Everything was on the line. 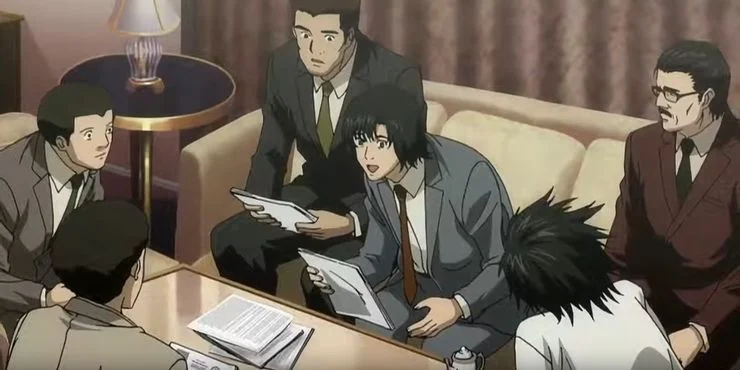 The new investigation team quickly narrowed down the list of suspects to two families: the Kitamura family and the Yagami family. The information leak came from one of those two households, and L's police team got to work setting up hidden cameras and bugs in both homes to try and catch Kira in the act. Light ultimately foiled this plan, but it did prove how loyal and brave L's new allies were, even breaking Japanese law to try and catch Kira. Touta Matsuda and Shuichi Aizawa protested at first, but Soichiro sternly told them to cooperate, and that they did. Light was now fighting a cohesive squad, not just L, and he soon felt the pressure.

L took the lead by enrolling at To-Oh University as Light's classmate, but his team was still hard at work, and they used forensic evidence to determine that Misa Amane was the second Kira. Mogi, one of the investigators, arrested Misa right there on To-Oh's campus, and then the team helped L secure Light as their second captive when Light turned himself in. What they didn't realize was that this was part of Light's plan to "prove" his and Misa's innocence. Once Light and Misa were freed, a new Kira arrived: Kyosuke Higuchi from the Yotsuba corporation. L and his police team investigated that too, though Aizawa dropped out and was replaced with two wanted criminals, code-named Aiber and Wedy. The former is a master con artist, the latter a burglar. L had enough dirt on both to coerce them into helping him, and with their aid and that of the remaining police (and even Light and Misa), L caught Kyosuke Higuchi at last. But it was all for nothing -- this was all part of Light's plan, and L's team was helpless when Light pressured Rem the shinigami into killing both L and Watari one afternoon.

From that point on in Death Note, Light became the new L. The surviving police (and Hideki Ide and Aizawa) became the new Kira-hunting team, usually operating in Light's own apartment a few years later. Aiber and Wedy, though, met their fate at the hands of Kira, as Light had no need for them.