Madaraushi, the developer of the tabletop role-playing game Kyōki Sanmyaku ~Jashin no Sanrei~ (Mountains of Madness ~Summit of the Evil Gods~), announced on Sunday that they are launching a crowdfunding campaign in October to fund a 10-minute pilot anime film Kyōki Sanmyaku that will be the "first step" toward an eventual anime film for the RPG.

Madaraushi stated that image board art and a script for the project are currently being drafted, and that the developer is currently looking for collaborators.

The Cthulu Mythos-themed tabletop RPG takes inspiration from H.P. Lovecraft's similarly-titled book At the Mountains of Madness (titled "Kyōki no Sanmyaku ni te" in Japanese), and is a focused scenario that has players exploring and climbing a mountain in a horror-themed story. The standalone RPG has no direct connection to the Call of Cthulhu tabletop RPG, or Rob Daviau and Miguel Coimbra's similarly titled Mountains of Madness board game.

Sandy Petersen and Chaosium's long-running Call of Cthulhu tabletop RPG isn one of the most popular tabletop RPGs in Japan, and it has been referenced many times in Japanese pop culture. New original scenarios continue to be published for the game.

Japanese Tabletop RPG players sometimes collect the events of their sessions into an edited prose format called a "replay" that they then sell with added art in conventions and events. Some of these replays have become popular enough to spawn anime adaptations, such as The Record of Lodoss War or Chaos Dragon. The Japanese tabletop RPG Night Wizard inspired a television anime in 2007. 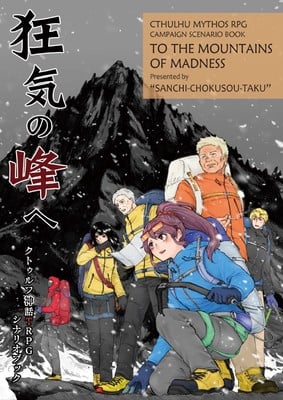