Crunchyroll Adds Over the Sky Anime Film to Catalog 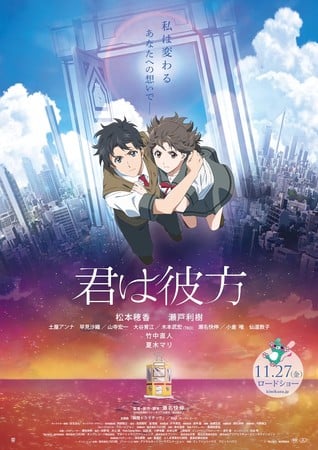 The film opened in Japan in November 2020. The teaser poster visual (seen right) shows the film's two main leads standing before the deserted East Exit of Tokyo's Ikebukuro Station, one of the film's settings. The tagline on the poster reads, "Why can't I remember ..."

The adolescent fantasy film is set in Tokyo's Ikebukuro district, and centers on two childhood friends named Mio and Arata. Mio has feelings for Arata, and always thinks about him, but has never been able to tell him how she feels. One day, they get into an argument over something trivial, and sometime afterward, Mio decides to make up with him. As she heads to Arata while being drenched by the rain, she gets into a traffic accident. When Mio regains consciousness, she finds herself in a new and unfamiliar world.

Yoshinobu Sena (Neko mo, Onda-ke's director and writer, Vampire Holmes' original concept and lead voice actor) directed the film, penned the script, and was also credited for the original concept. This was Sena's directorial debut with a theatrical anime film. Digital Network Animation produced the animation. CUCURI was credited for planning and developing the project. Rabbit House and Elephant House distributed the film, and Kadokawa published the original novel.