The official YouTube channel for Kodansha's Weekly Shōnen Magazine began streaming an anime promotional video by SHAFT for Oh! great's manga adaptation of NisiOisin's Bakemonogatari novels on Thursday. The video commemorates Thursday's release of the manga's 16th compiled book volume, in which the story is entering its final stage.

The promotional video features a returning staff. Director of the Bakemonogatari television anime Akiyuki Simbo directed the video and wrote the storyboard. The cast returns from the television anime and includes: 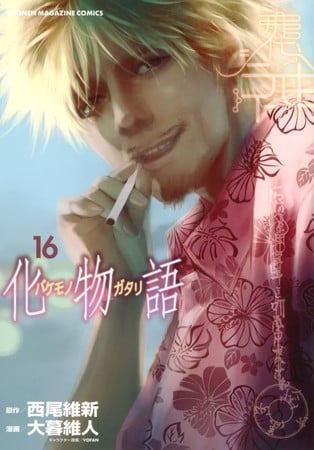 The manga entered its climax in July 2019.

The manga went on hiatus in July 2019 due to Oh! great's sudden illness, and it resumed in September 2019.

Vertical is releasing the original novels in English, and it began releasing the manga in October 2019. The company describes the story:

One day, high-school student Koyomi Araragi catches a girl named Hitagi Senjougahara when she trips. But—much to his surprise—she doesn't weigh anything. At all. She says an encounter with a so-called “crab” took away all her weight … Monsters have been here since the beginning. Always. Everywhere.

The manga launched in Weekly Shōnen Magazine in March 2018

Oh! great is known for creating the series Air Gear, Junk Story - Tetsukuzu Monogatari, and Tenjho Tenge, which all inspired anime. He has also worked on the story and art for numerous manga such as Burn Up!, Five, Himiko-Den, Majin -Devil-, Naked Star, and Silky Whip. Additionally, he worked on end card illustrations for the anime series Arakawa Under the Bridge x Bridge and Yamada-kun and the Seven Witches.

Aniplex of America is releasing the anime adaptations of the Monogatari Series in North America. The most recent anime in the franchise, Zoku Owarimonogatari, premiered in November 2018.