The official website for the television anime of Kentaro Yabuki's Ayakashi Triangle manga began streaming a promotional video on Tuesday, and it reveals and previews the opening theme song "Neppu wa Ruten-suru" by Philosophy no Dance and the ending theme song "Itowanai feat. Miyu Tomita, Kana Ichinose" by MIMiNARI. The website and video also reveal the anime's January 9 debut.

The series will premiere on Tochigi TV, Gunma TV, and BS11 on January 9 at 1:00 a.m. (effectively, January 10) before airing on Tokyo MX, TV Aichi, and YTV later that night. 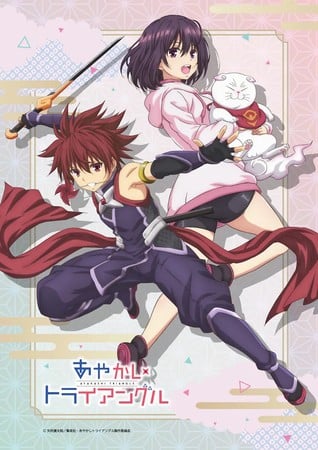 Noriaki Akitaya (Bakuman., Castle Town Dandelion, Slow Loop) is directing the anime at CONNECT, with Kei Umabiki as assistant director. Shogo Yasukawa (Hyperdimension Neptunia, Food Wars! Shokugeki no Soma, The Executioner and Her Way of Life) is in charge of the series scripts. Hideki Furukawa (Strike The Blood III, IV, FINAL, Battle Girl High School, Invaders of the Rokujyōma!?) is designing the characters. Jin Aketagawa is the sound director, and Rei Ishizuka (A Couple of Cuckoos, PriPara) is composing the music.

Viz Media and Shueisha are both publishing the manga in English digitally, and Seven Seas is releasing the compiled book volumes digitally and physically in English. Seven Seas released the first uncut volume on November 1. Seven Seas describes the story:

Teenager Kazamaki Matsuri has long been part of an elite force of ninja exorcists, tasked with fighting malicious ayakashi spirits who threaten Japan–especially those after his childhood friend, the spirit medium Kanade Suzu. As he fiercely protects her, and his relationship with her blooms from friendship into something more, a powerful cat ayakashi vows to get between the lovebirds: by casting a forbidden spell that turns Matsuri into a woman! With no apparent way to undo the spell, Matsuri must continue battling ayakashi–and go back to school–in this new feminine body until he can find a way to turn back.