The official website for the television anime of Miki Yoshikawa's A Couple of Cuckoos manga began streaming the second main promotional video for the anime on Thursday. The video reveals and previews the anime's ending theme song "Shikaku Unmei" (Square Destiny) by Sangatsu no Phantasia, and also reveals the anime's April 23 premiere date.

The anime will air in the NUMAnimation programming block on TV Asahi and its affiliates. Crunchyroll will stream the anime outside Japan. 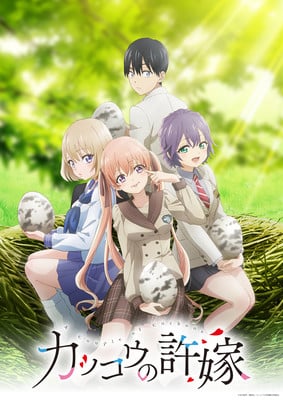 Kodansha Comics publishes the manga in English, and it describes the romantic comedy:

16-year-old super-studier Nagi Umino, second-year student at the Megurogawa Academy high school, was switched at birth. On his way to a dinner to meet his birth parents, he accidentally meets the brash, outspoken, Erika Amano, who is determined to make Nagi her fake boyfriend as she never wants to actually marry. But once Nagi makes it to dinner, he finds his parents have decided to resolve the hospital switch by conveniently having him marry the daughter his birth parents raised...who turns out to be none other than Erika herself!

The anime will star Kaito Ishikawa as Nagi Umino, Akari Kitō as Erika Amano, and Nao Tōyama as Hiro Segawa. Other cast members include:

Hiroaki Akagi (Karakai Jōzu no Takagi-san, Those Snow White Notes) is the chief director of the anime and Yoshiyuki Shirahata (episode director for Sleepy Princess in the Demon Castle, Great Pretender) is directing the anime at Shinei Animation and Synergy SP. Yasuhiro Nakanishi (Kaguya-sama: Love is War both seasons, Toilet-Bound Hanako-kun) is overseeing the series scripts, and Aya Takano (Karakai Jōzu no Takagi-san, Polar Bear's Café) is designing the characters. Ikimono-gakari vocalist Kiyoe Yoshioka performs the opening theme song "Dekoboko" (Rough), as heard in the video above.

Yoshikawa (Yamada-kun and the Seven Witches, Yankee-kun to Megane-chan) launched the A Couple of Cuckoos (Kakkō no Iinazuke) manga in Kodansha's Weekly Shōnen Magazine in January 2020. Kodansha published the manga's 11th compiled book volume on Thursday. The manga received a novel that shipped in April 2021.

Shueisha's Young Jump magazine revealed in February that Yoshikawa's manga will have a collaboration with Aka Akasaka and Mengo Yokoyari's Oshi no Ko manga.