There have been husbando wars. There have been waifu wars. There's even been best girl and best boy wars, ultimately dividing various fandoms about who deserves to take each crown. But we're going to be doing something different by ranking the best girlfriends in anime. 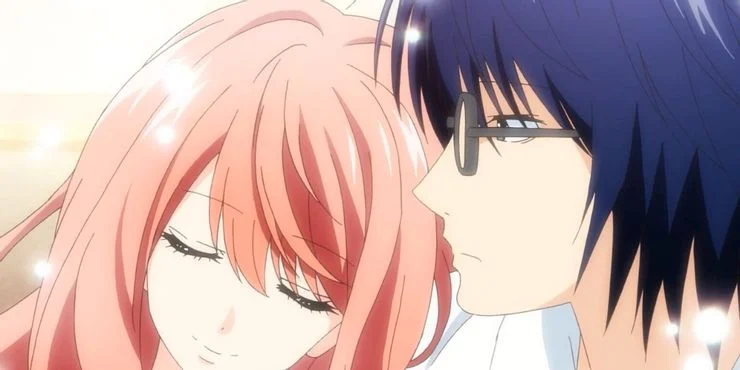 Iroha Igarashi from 3D Kanojo: Real Girl is one of the most overlooked girlfriends in anime. After meeting Hikari Tsuitsui while cleaning the pool and agreeing to go out with him, she brings out the best in him despite him thinking of himself as nothing but a creepy otaku.

Iroha always stands up for Hikari when others make fun of him. She's kindhearted, takes their relationship seriously, and wholeheartedly loves him for who he is as a person. Even though their relationship has a contingency of 6 months, Iroha's love for Hikari doesn't change at all, making her one of the most loyal girlfriends in anime.

14. Misa Amane (Death Note) — Misa Is A Loyal, Yet Dangerous, Lover To Light 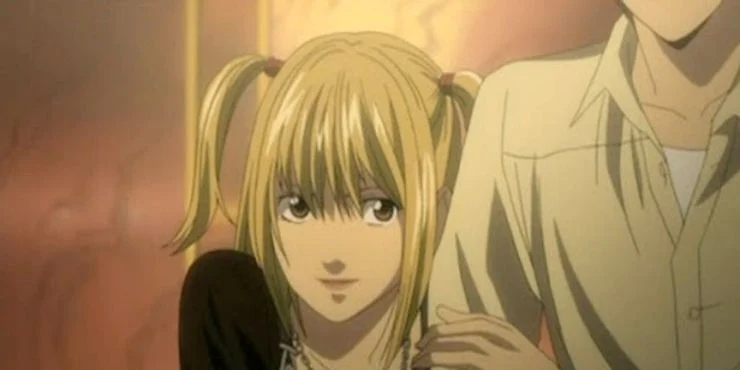 Although Misa Amane from Death Note looks like a cute girl with a fashion sense for all things goth, fans would be sorely mistaken. Misa is in love with the notorious Kira, the alias of Light Yagami, because he inadvertently killed the man who murdered her family. He didn't do this for her—he did it for his plan.

Misa would do anything for Light, whether it's an accomplice to murder or acting as a decoy to allow him to escape. She went as far as shortening her lifespan multiple times to gain Shinigami Eyes, the ability to learn a person's name by looking at them, to aid him.

13. Touka Nanami (Bloom Into You) — Touka Is Full Of Surprises As She Learns To Love Yuu 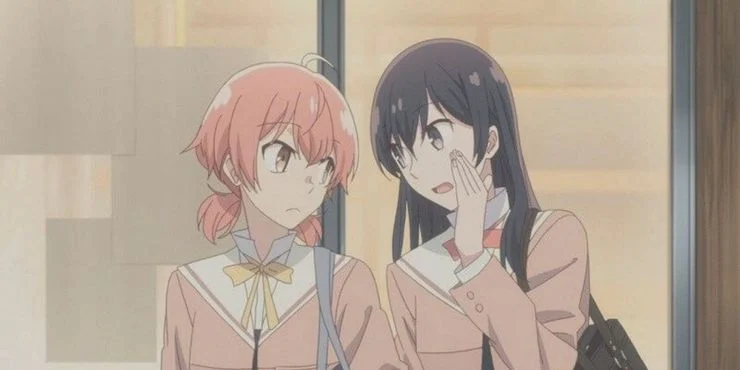 Touka Nanami is the dependable and outgoing Student Council President, but in truth, this is all a facade. She dislikes showing any signs of weaknesses and hides her insecurities, so she doesn't truly form a bond with anyone.

That's until she falls in love with Yuu Koito after she joins the student council. Touka can act like herself around Yuu and not worry about what mask she should wear. Sometimes childlike, sometimes mischievous. Touka is a wildcard for her actions toward Yuu, which makes her the perfect girlfriend to surprise her beloved.

12. Rinko Yamamoto (My Love Story!!) — Rinko Falls In Love With Takeo's Kindness, Not His Appearance 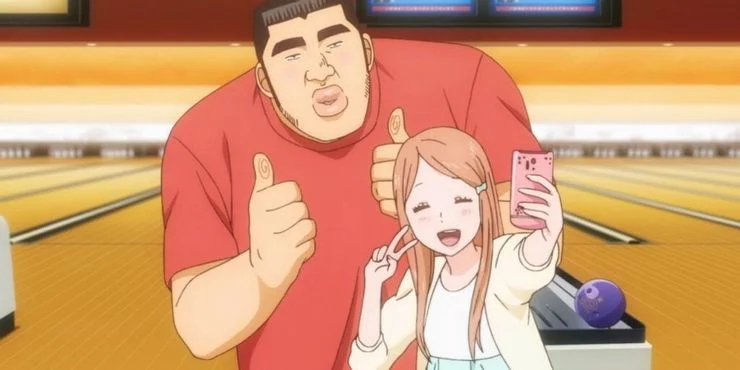 There's probably no girlfriend as pure as Rinko from My Love Story. After being saved by Takeo from a molester on the train, Rinko falls in love with him and promptly asks him to be her boyfriend afterward. This is a very unlikely thing to occur in anime and real life, so that gives her bonus points for taking the initiative. 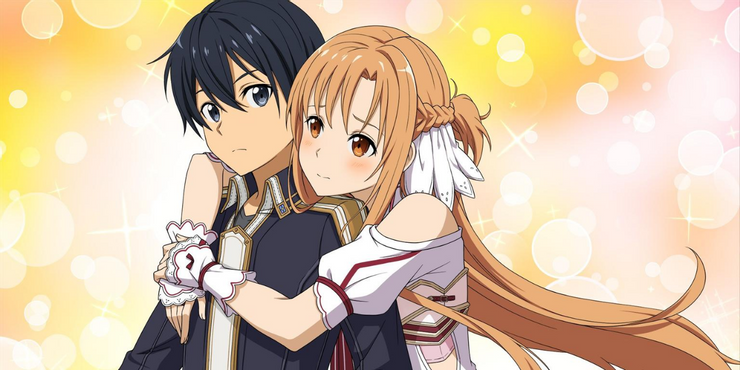 Asuna from Sword Art Online is so popular that she ranks as one of the highest characters to cosplay. Throughout the series, she becomes one of the strongest swordswomen under the name "Lighting Flash" because of her rapier skills.

She is even equal with Kirito, or even stronger, than him in real-life in the movie, Ordinal Scale. Besides her fighting skills, she is a devoted girlfriend to Kirito in reality, despite the harem surrounding him. Her patience devotion to him as he was in his coma during Alicization truly shows how much she loves him. 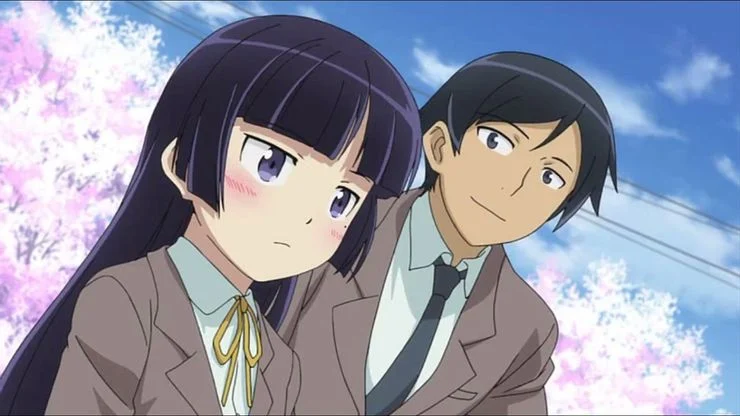 Oreimo has many layers to the series, with one of them being Kyousuke and Ruri's— more well-known by her nickname Kuroneko— relationship. They begin to date after Ruri confesses to him, and they have a fulfilling relationship.

Despite being a few years younger than Kyousuke, she is a mature older sister and an otaku who hides behind her cosplay to express her true feelings. She even puts up with her frenemy and younger sister's verbal abuse towards Kyousuke, Kirino— although their relationship ended because he Kirino over Ruri. 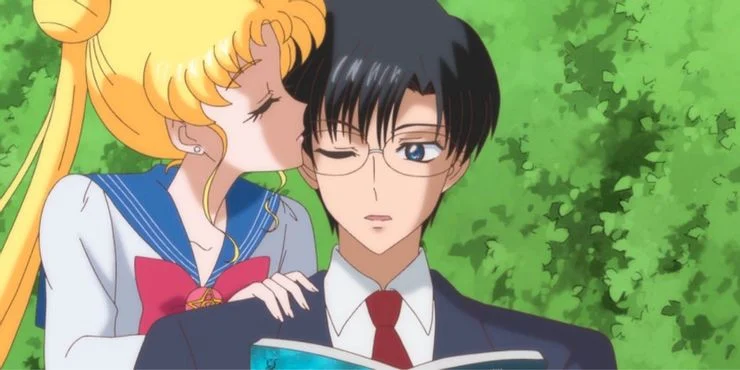 Usagi Tsukino and Mamoru Chiba's love has transcended time and centuries, solidifying them as one of the best couples in anime, but let's not forget about the other half. Although she appears as a spoiled crybaby initially, with the help of the other Sailors Soldiers and Mamoru's love, she grows into a great woman.

She cares deeply for Mamoru, affectionately calling him Mamo-chan, and lets it be known how much she loves him at all times. Whenever he's in danger she comes to his rescue, and she's always supportive despite them having limited time to see one another. 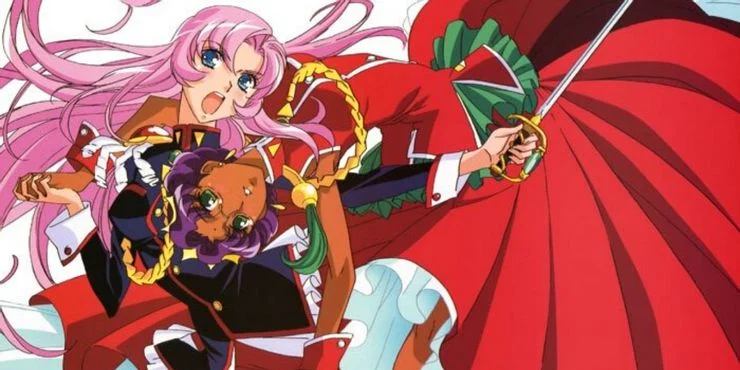 Utena Tenjou from Revolutionary Girl Utena wishes to be a prince, and there's no doubt she is to Anthy Himemiya. After winning Anthy as a prize in a series of sword duels, Utena realizes how wrong it is to objectify her and decides to find a way to free her from the role of Rose Bride.

7. Kouko Kaga (Golden Time) — Kouko Learns How To Love, Together With Banri 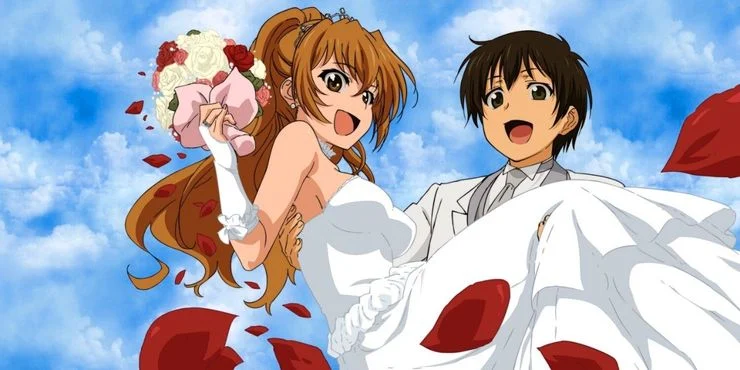 Kouko Kaga from Golden Time will surely take anyone who dates her on a whirlwind trip. Her first entrance was quite memorable as she followed her former crush Mitsuo Yanagisawa to college and assaulted him with a bouquet of roses. She acts haughty and proud at first, but after falling in love with Banri Tada she becomes more honest and kind.

She doesn't hesitate to tell him how she's feeling. Before they began dating Kouko was adamant in her pursuit of him, and when they finally did become a couple, she's devoted to him. Kouko is one of the best examples of a loyal girlfriend. 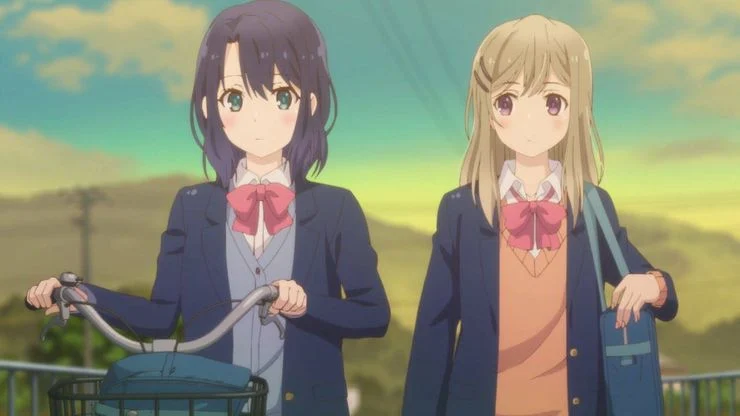 Adachi & Shimamura follows two girls, Sakura Adachi and Hougetsu Shimamura, as they grow closer after constantly skipping class together. Although her class thinks she is a delinquent, Adachi is shy and not good at interacting with others.

That isn't until she meets Hougetsu and becomes attached to her to the point of falling in love. Sakura's feelings for her are shown realistically, as she slowly realizes she is falling in love with her— and even the thought of holding her hand makes her blush. 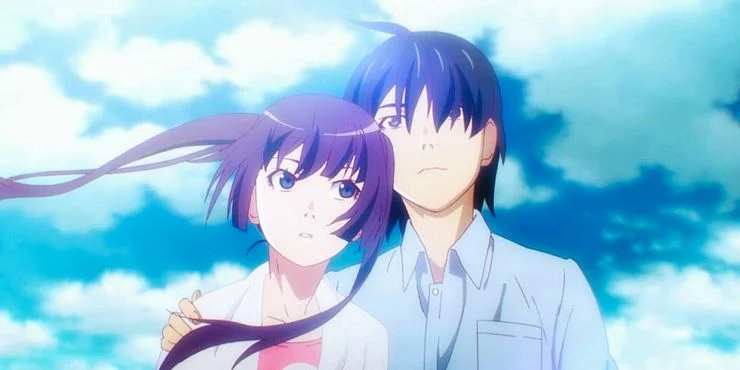 Hitagi Senjougahara is neither a tsundere nor a yandere. She's both by her own admission, although she would qualify as a kuudere. After Araragi saves her from the Heavy Stone Crab, an apparition that took her weight away, Hitagi confessed she loved him and they began to date.

If he's acting foolish, she'll pull out her signature stapler and threaten to staple his mouth shut. Despite her sharp-tongue and expressionlessness, she loves Araragi and would do anything to help him, and ensures everyone knows she's 1# despite the harem surrounding him. Hitagi's faithfulness is a great aspect.

4. Mai Sakurajima (Rascal Does Not Dream Of Bunny Girl Senpai) — Mai Is A Realistic, Yet Doting, Girlfriend 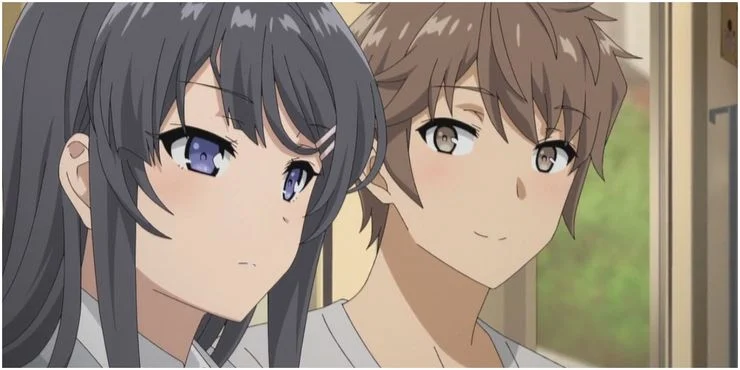 Mai Sakurajima from Rascal Does Not Dream Of Bunny Girl Senpai appears as a typical tsundere and kuudere at first, but her character has a surprising amount of depth. After Sakuta resolves her appearing invisible to others, they begin to date after he confesses to her.

What ensues are some of the most normal, yet endearing, moments between them. Mai is a no-nonsense type of person, but she still shows glimpses of affection towards him. As the story progresses, it's also shown that she is both indebted to him for accepting her for who she is and vice-versa.

3. Belldandy (Ah! My Goddess) — Belldandy Is A Supportive Girlfriend Who Loves Keiichi 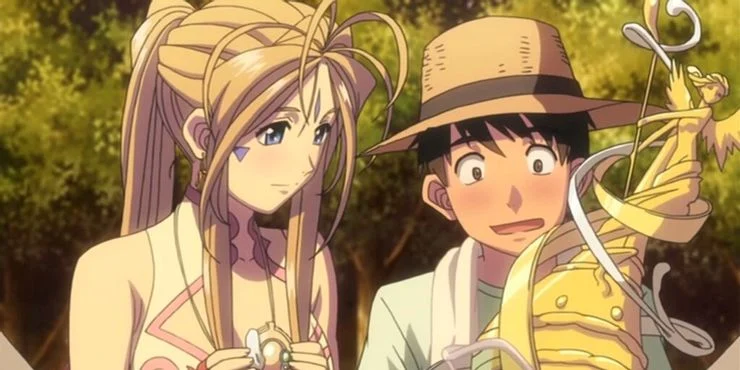 Ah, here is fans' one and only goddess, Belldandy. Well, she's one of the three goddesses that descend to Earth to live with Keiichi Morisato, but the only one who becomes his girlfriend. Since she's a goddess, she's perfect. Kindhearted, beautiful, and the owner of an angelic voice, Belldandy loves Keiichi because he's honest and genuine.

She also values his life and safety above her own, making her one of the most selfless girlfriends in anime. She always boosts him up, encourages him whenever he belittles himself and stays devoted to him throughout the series.

2. Kyouko Hori (Horimiya) — Kyouko Loves Izumi For His Personality & Doesn't Judge Him Like The Others 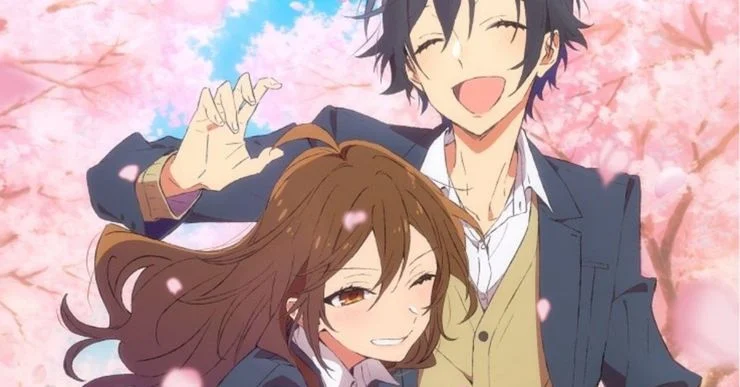 Horimiya was one of the most anticipated manga to receive an anime adaption, and one of the reasons was because of the two leads' relationship. After Kyouko and Izumi both discover their true personalities outside of school, they begin to hang out.

It's not long after that they realize they like each other, and they begin to date. What's great about Kyouko, in the beginning, is how she is clear to show her feelings of affection towards Izumi. She apologizes for any misunderstandings and pushes him to be the best version of himself, showing her to be one of the most supportive girlfriends in anime. 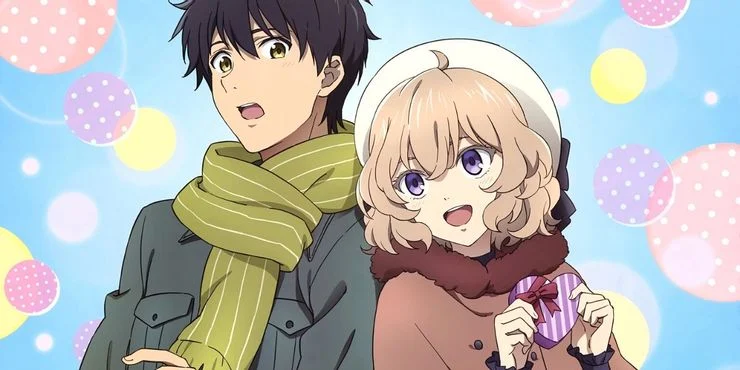 Kotoko Iwanaga is from the mystery romance anime In/Spectre. After falling in love with Kuro at first sight, Kotoko doesn't beat around the bush and immediately confesses to him. Although Kuro is suspicious of the small Goddess of Wisdom, they become a couple after a year.

Unlike Kuro's ex-girlfriend who thought of him as a monster for his instantaneous healing abilities, Kotoko thinks nothing of it and loves him all the same. With Kotoko herself missing one eye and one leg, she knows what it feels like to be judged for her imperfections, which is also a factor in why she loves him. Because of Kotoko's pure love and affection, she is one of the best girlfriends in anime.