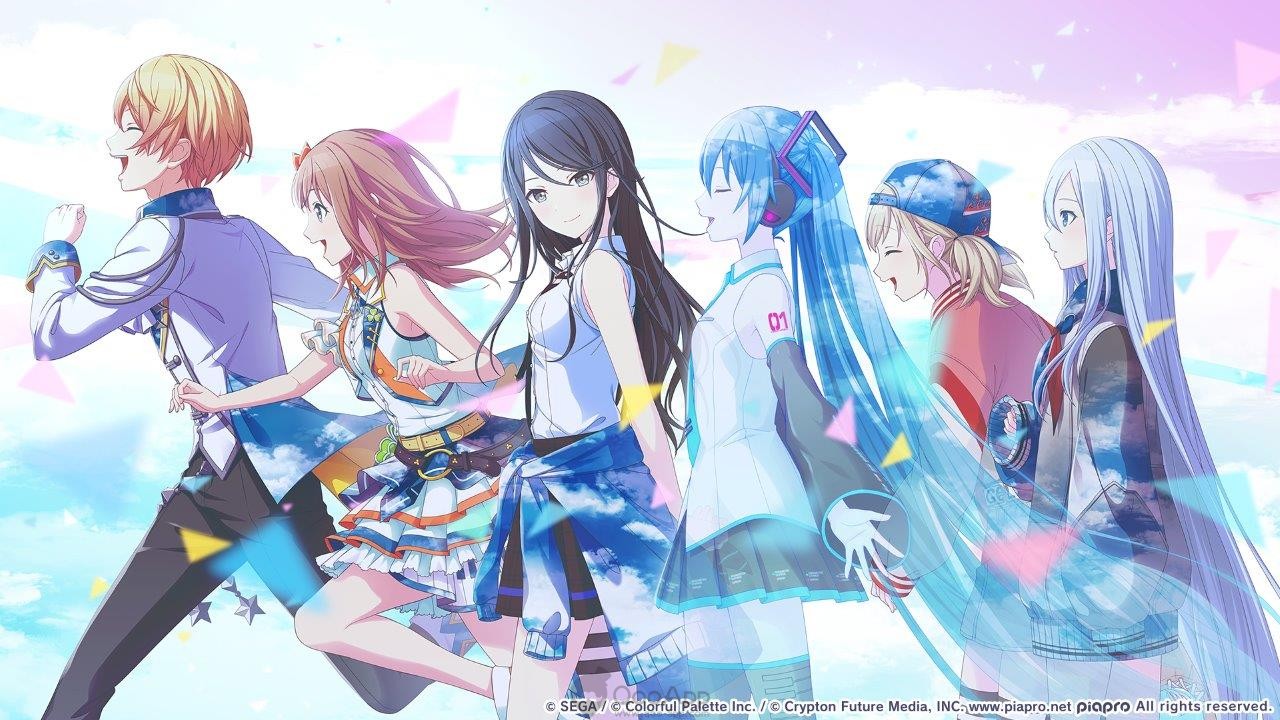 The game will be adding 14 playable songs, one every day between September 30 and October 13, including an anniversary song “Gunjo Sanka” (群青讃歌) created by Eve. 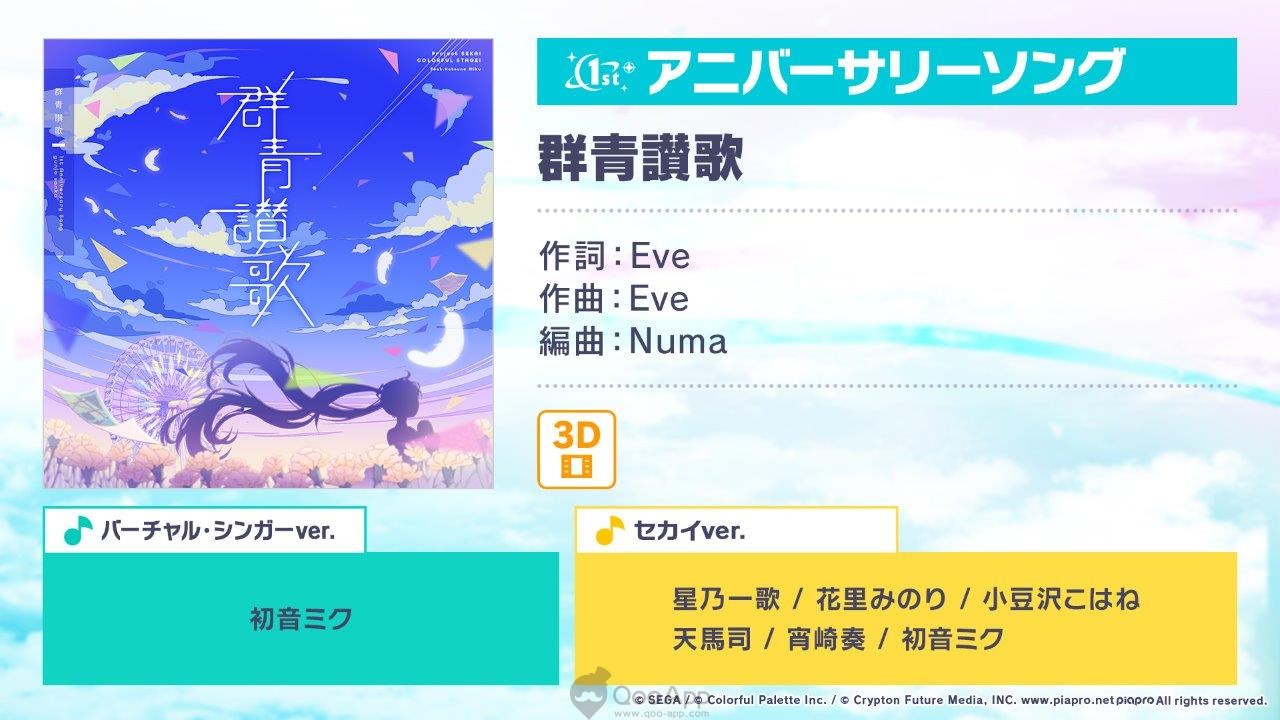 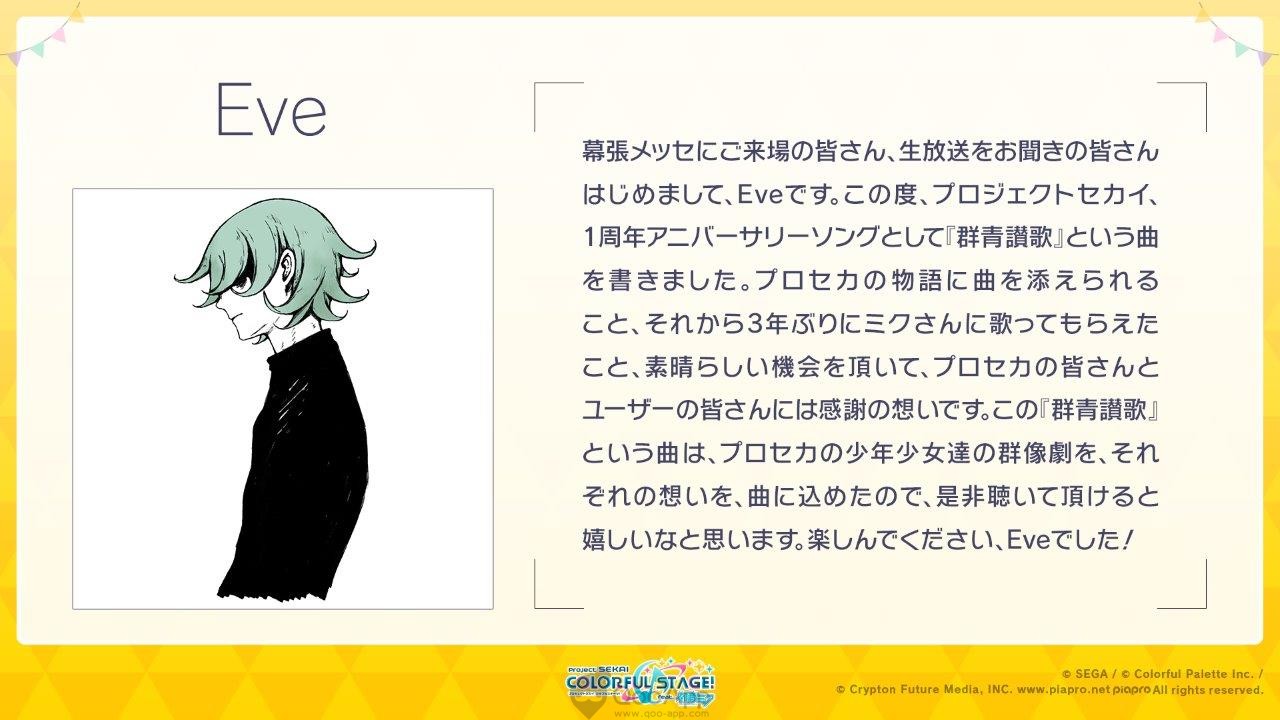 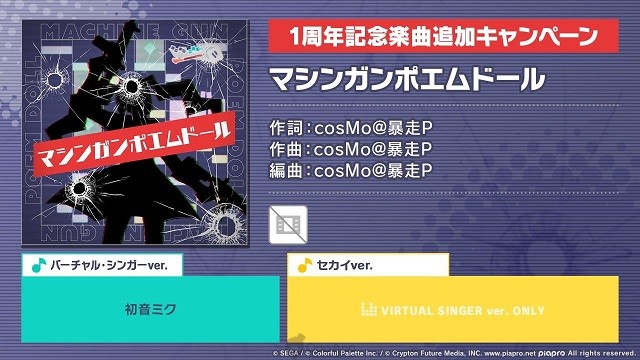 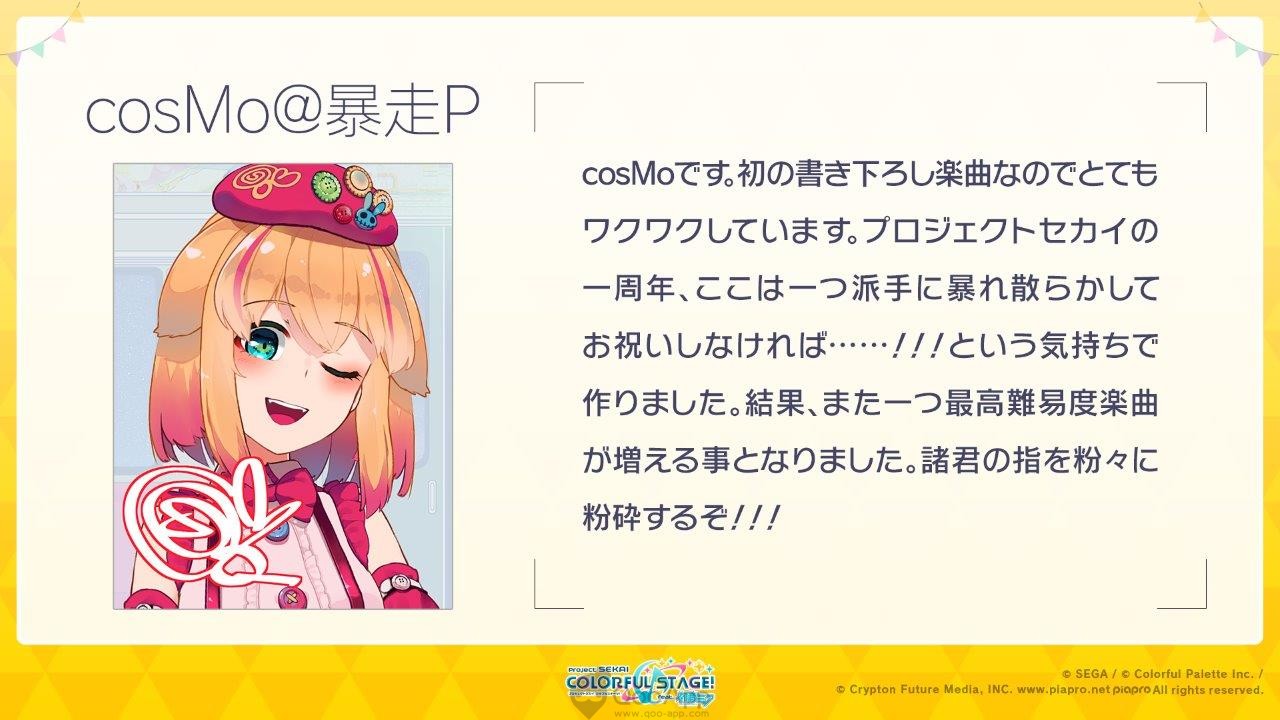 The 14 playable songs added to the game are as follows, including “ray” and “Hello,world!” (OP of Blood Blockade Battlefront) that is originally performed by BUMP OF CHICKEN. 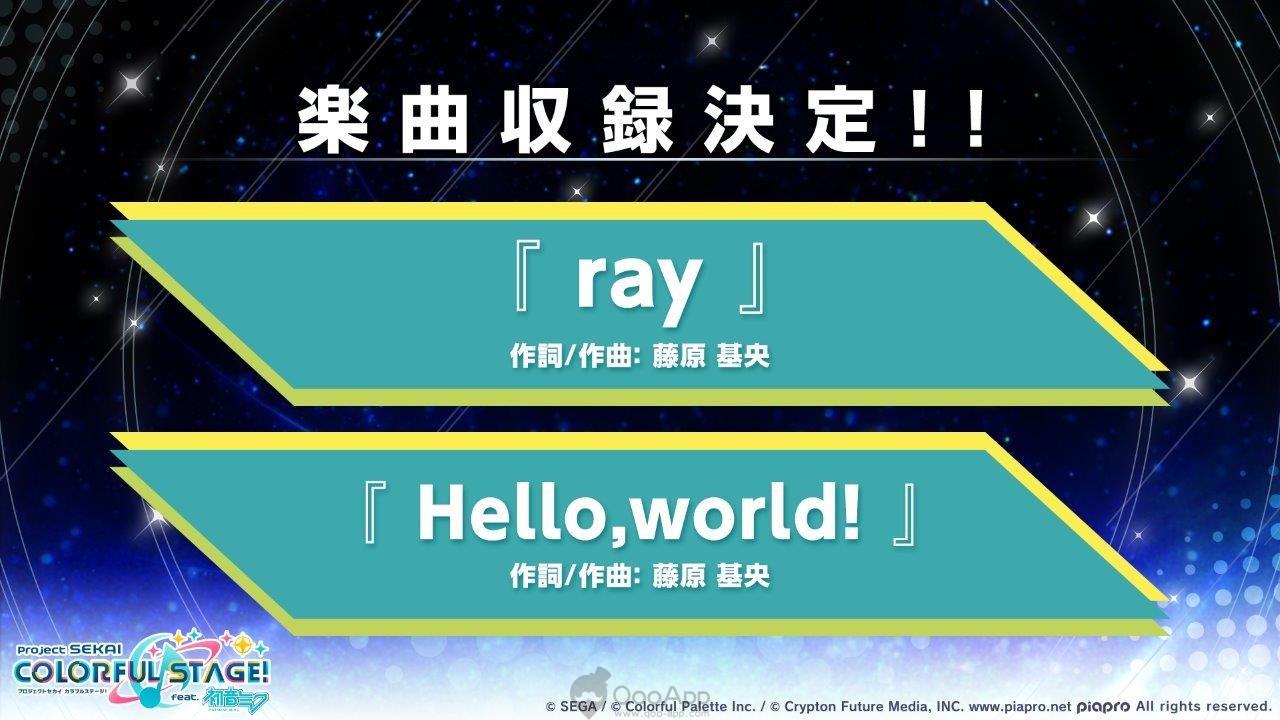 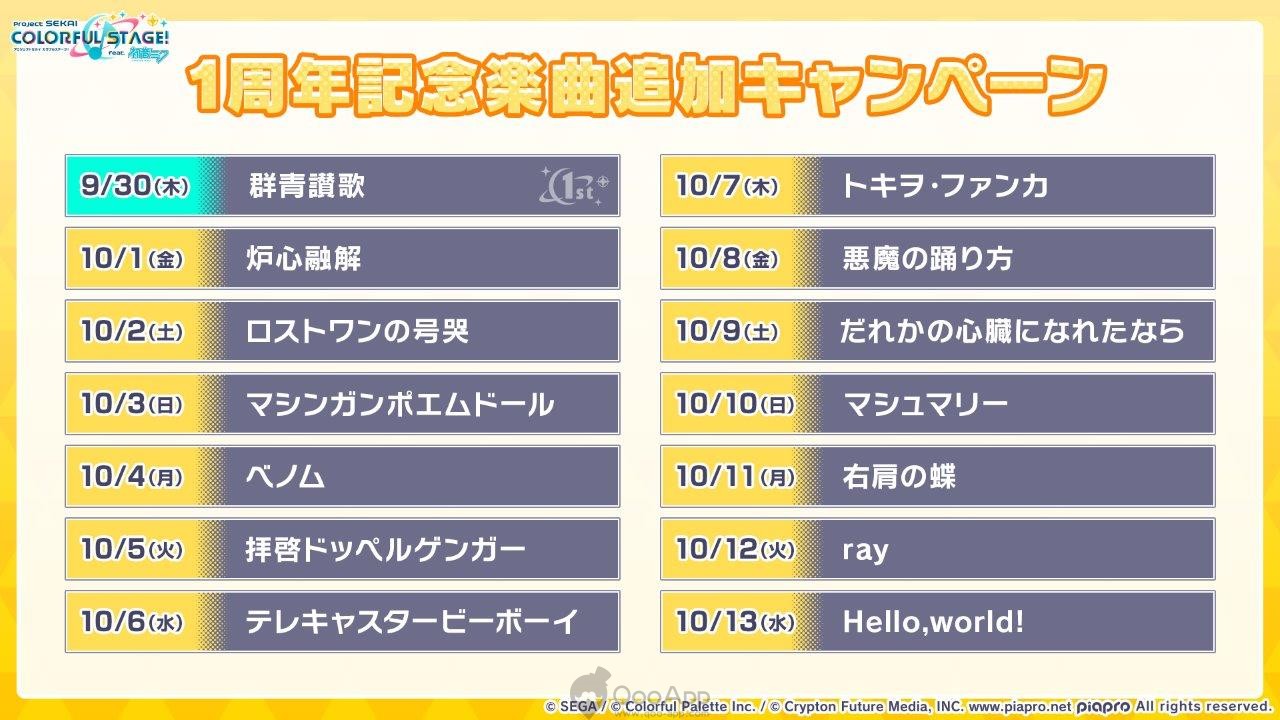 In celebration for the collaboration, ★2 [Gift from Sleeping Princess] Hatsune Miku will be presented to all players as a login bonus. 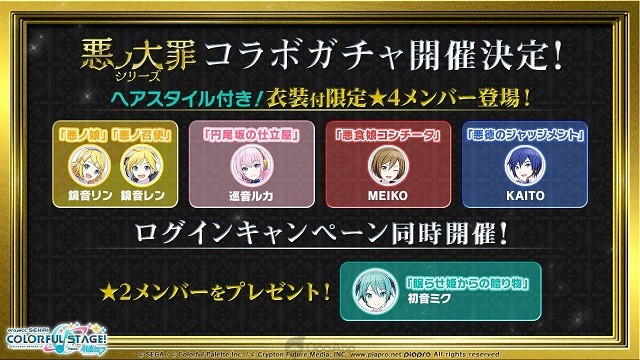 Composer Karasuya Sabou is joining the game as creator. He is writing a new unit song for Wonderlands×Showtime. 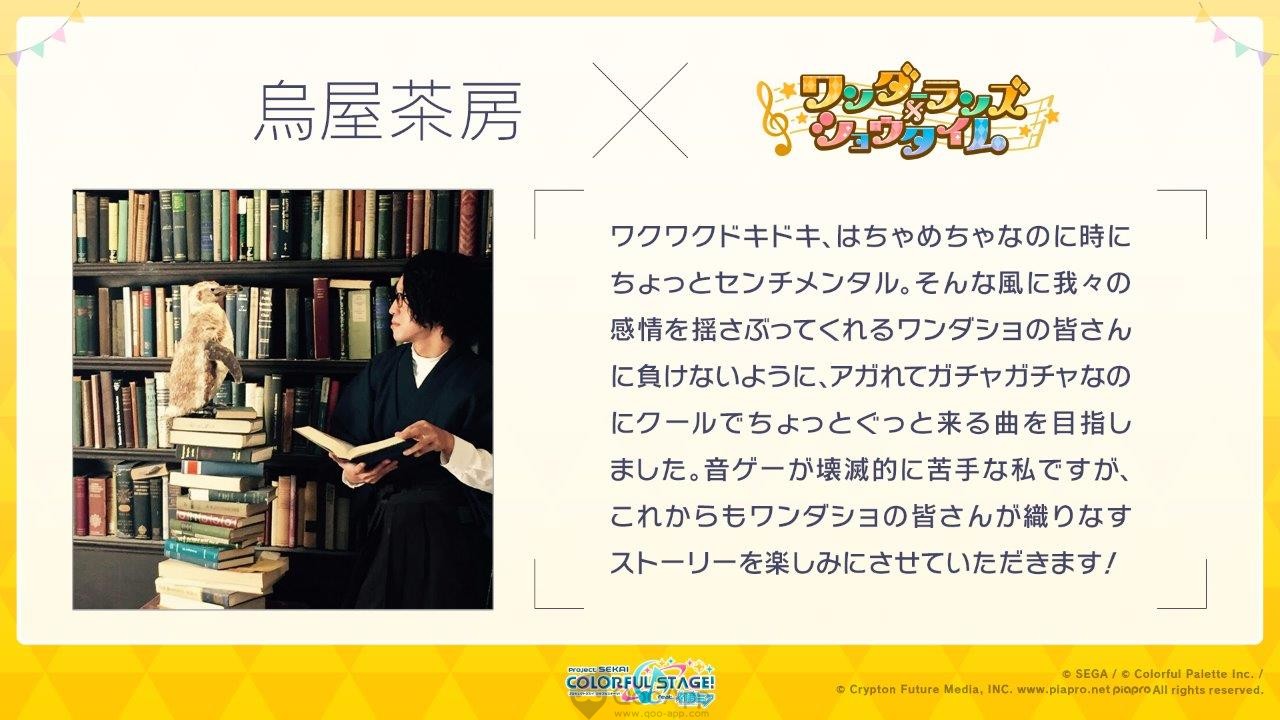 A new Virtual Live mode “Connect Live” will also be held later on. In Connect Live, the characters will perform the full length of the songs and will respond to the messages and calls in real-time. It will also feature more stage effects. The 1st tour of Connect Live will be held for each unit, and performances are scheduled every 1 to 2 months.

A paid ticket is needed for the Connect Live, but part of the live will be available for free. An open rehearsal is also available before live. 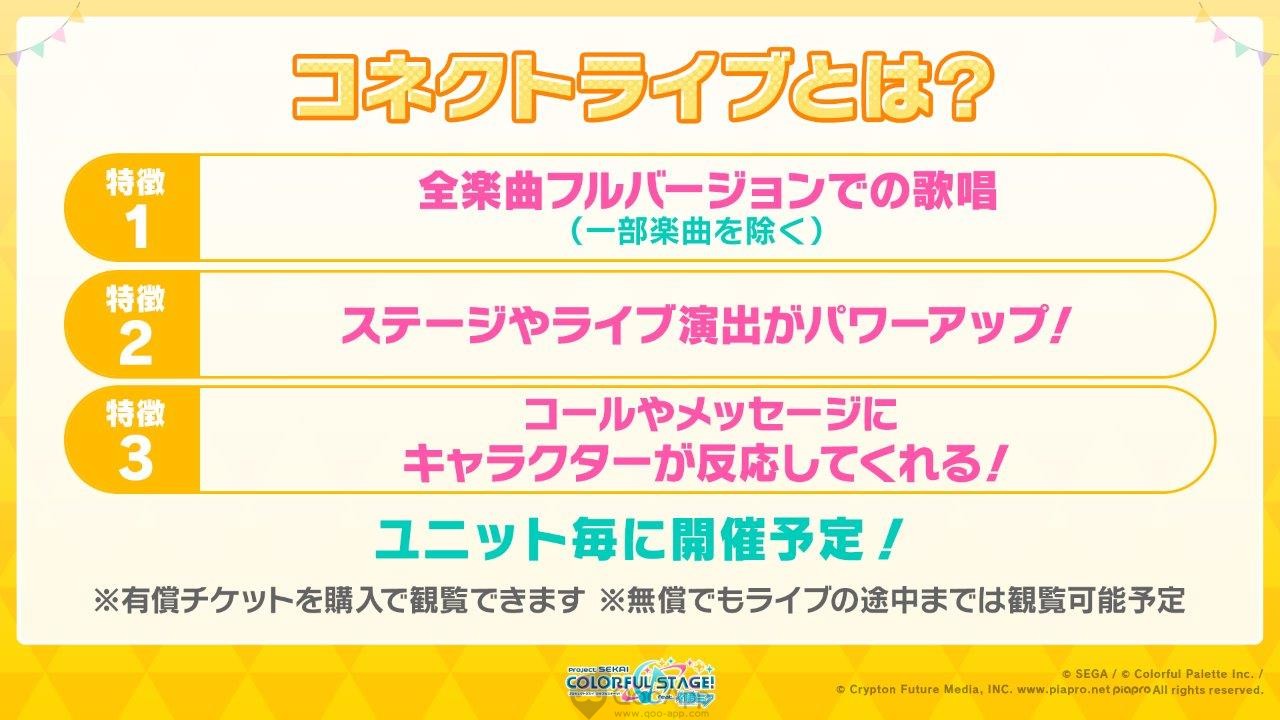 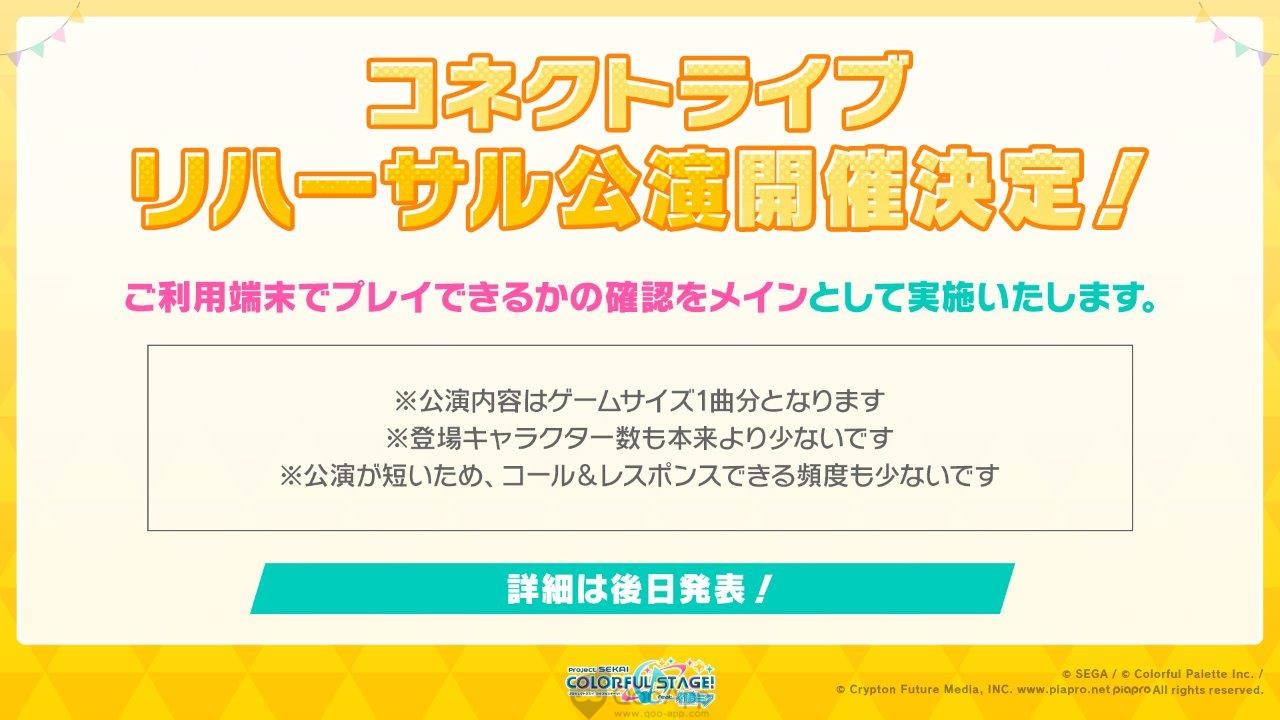 In celebration of the 1st anniversary, players who login for seven days during September 30 to October 13 can obtain a total of Crystals x 3,000 and 10x gacha ticket x 7. 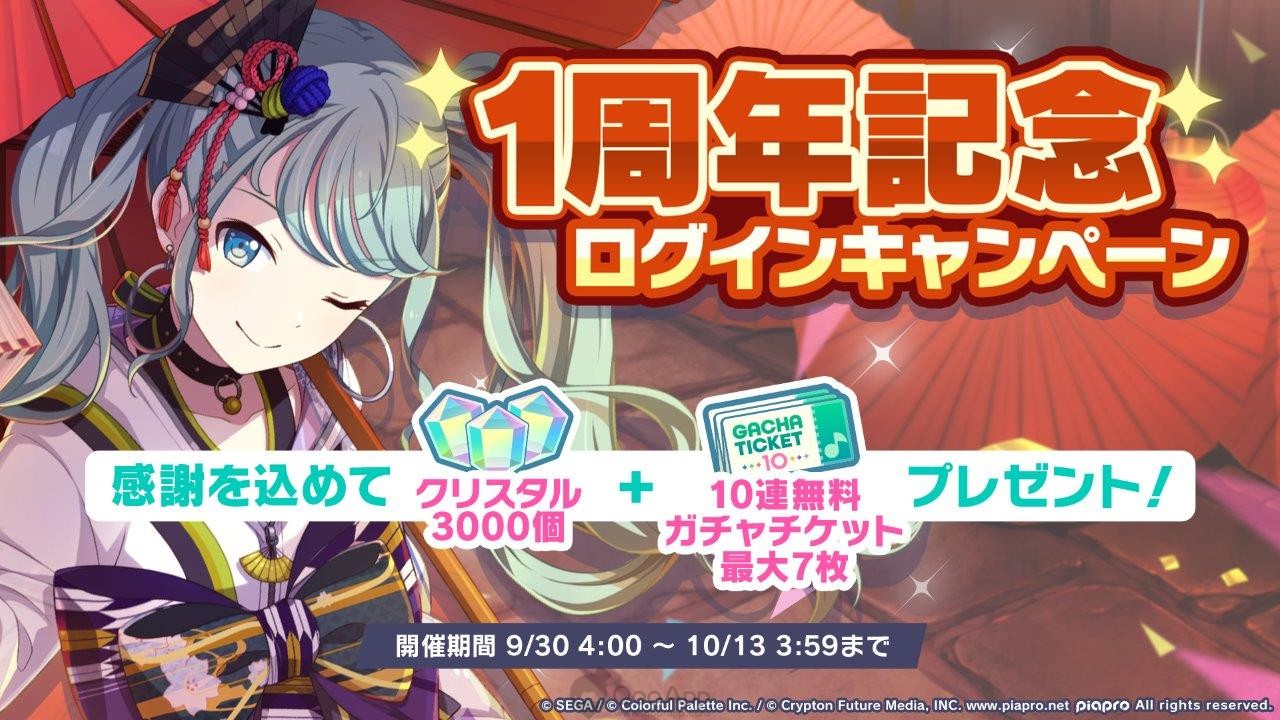 The 1st Anniversary Memorial Select Gacha will be held from September 30 to October 31. The gacha allows you to select one ★ 4 member from the pick-up members, but paid crystals are needed. 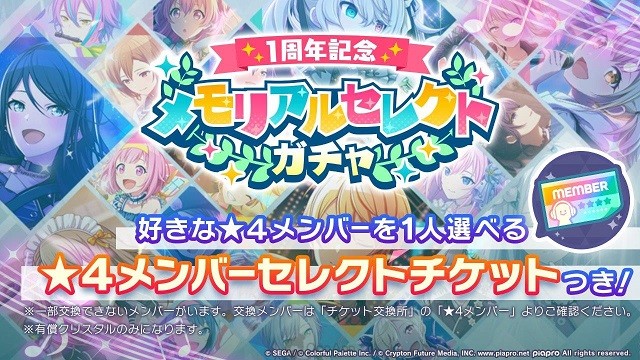 The Premium Gift Gacha will be held from October 1. You can obtain 1st anniversary limited costumes and special costumes in this one-time only limited gacha. It will be held for each unit on a daily basis and is available for paid crystals only. 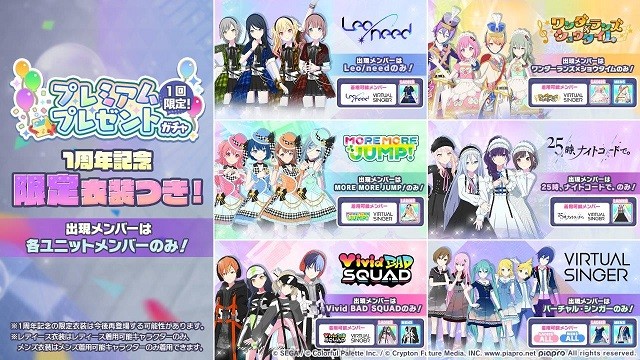 The date for the Birthday Virtual Live of Haruka Kiritani, Honami Mochizuki has been revealed. The schedule is as follows; 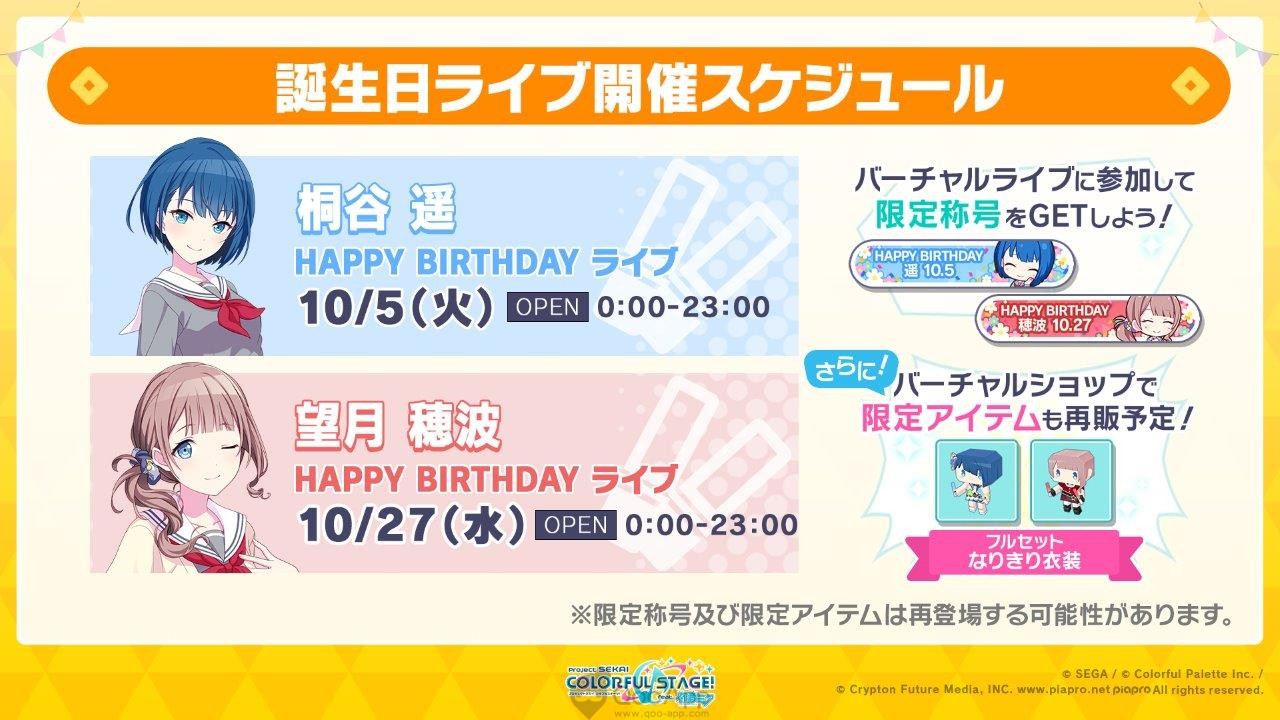 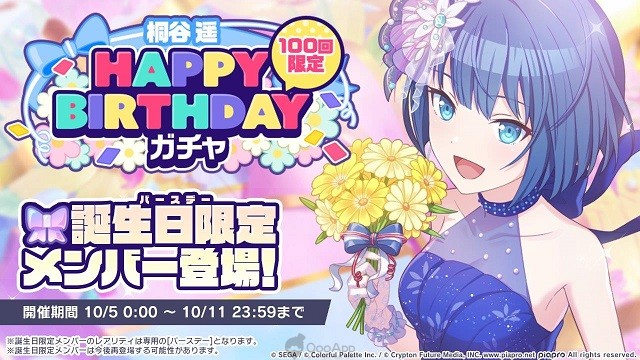 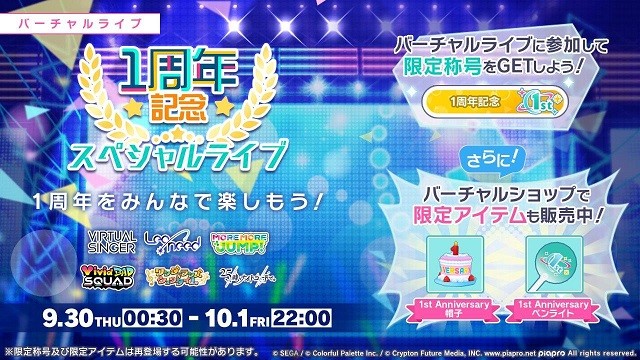 Limited items “Narikiri Costumes” for each unit member will be on sale in Virtual Live Shop from September 30 to October 11. 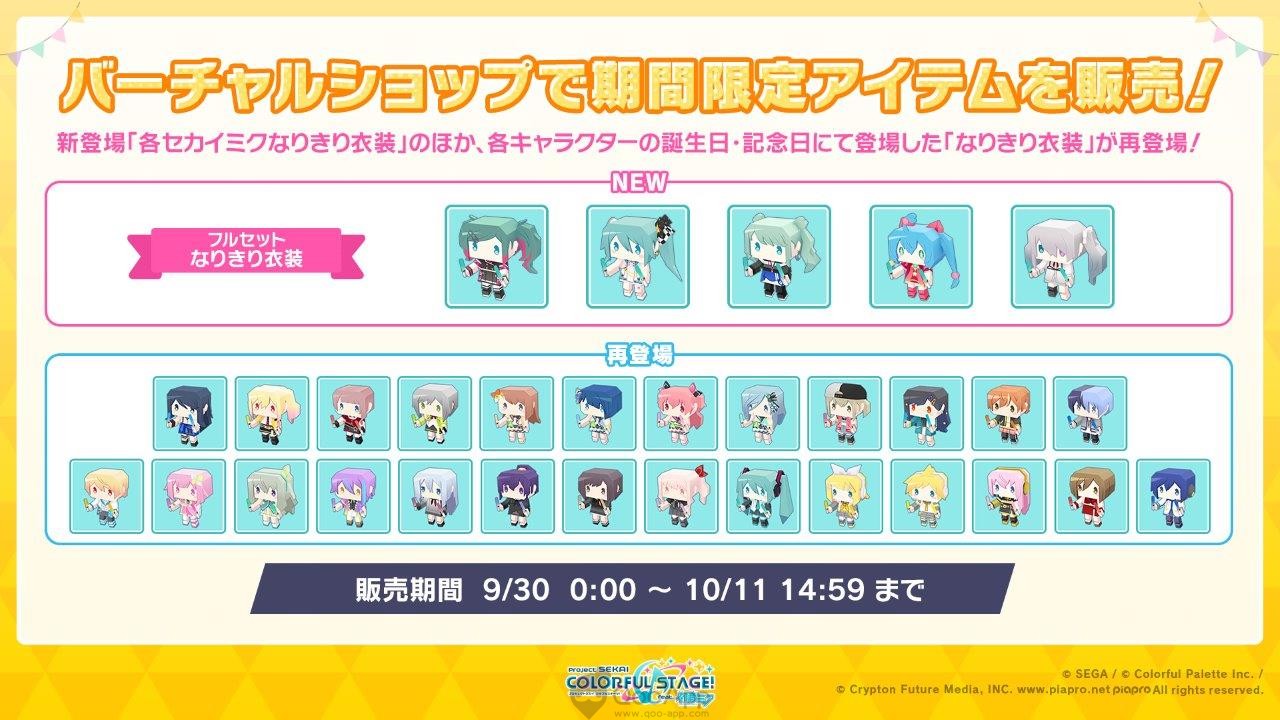 As a 1st Anniversary Sale, paid crystals will be available at a discount for a limited time. 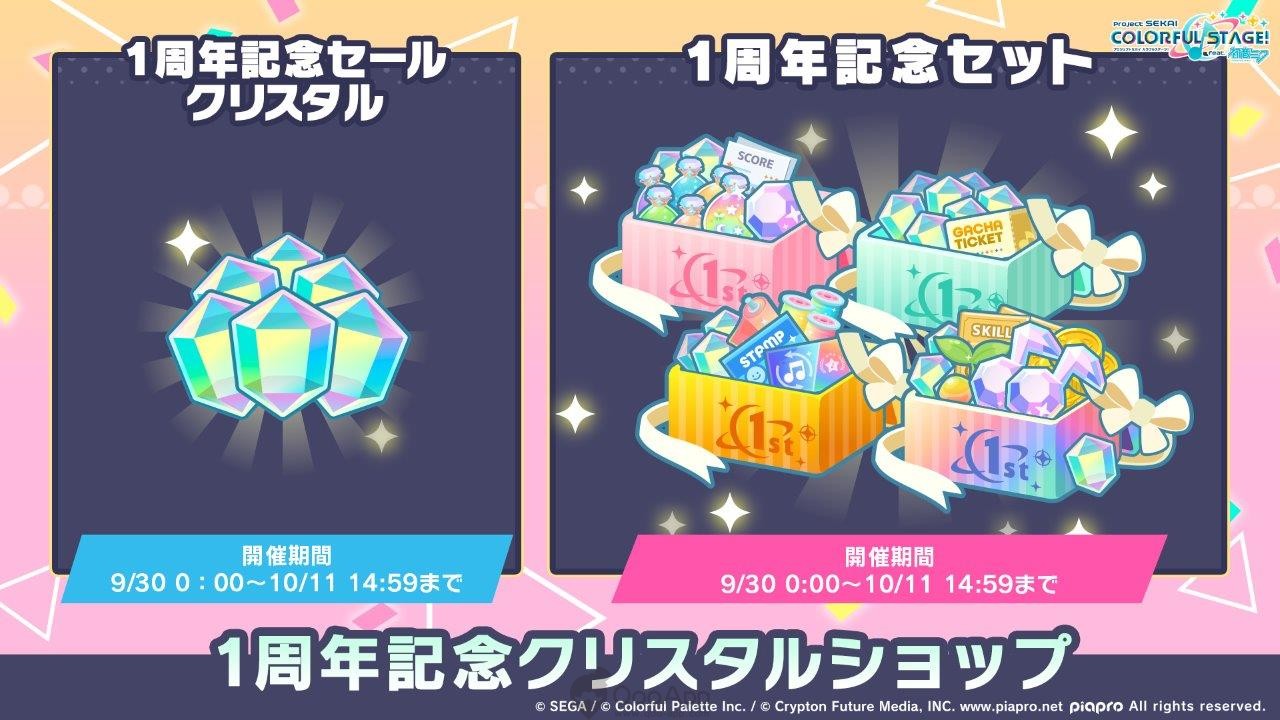 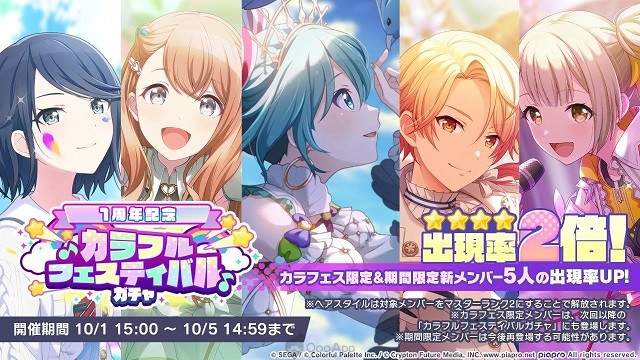 Project Sekai is getting a 10-episode mini-anime “Puchi Sekai” featuring the characters in 3D form. The anime will stream on the official Youtube channel for free. 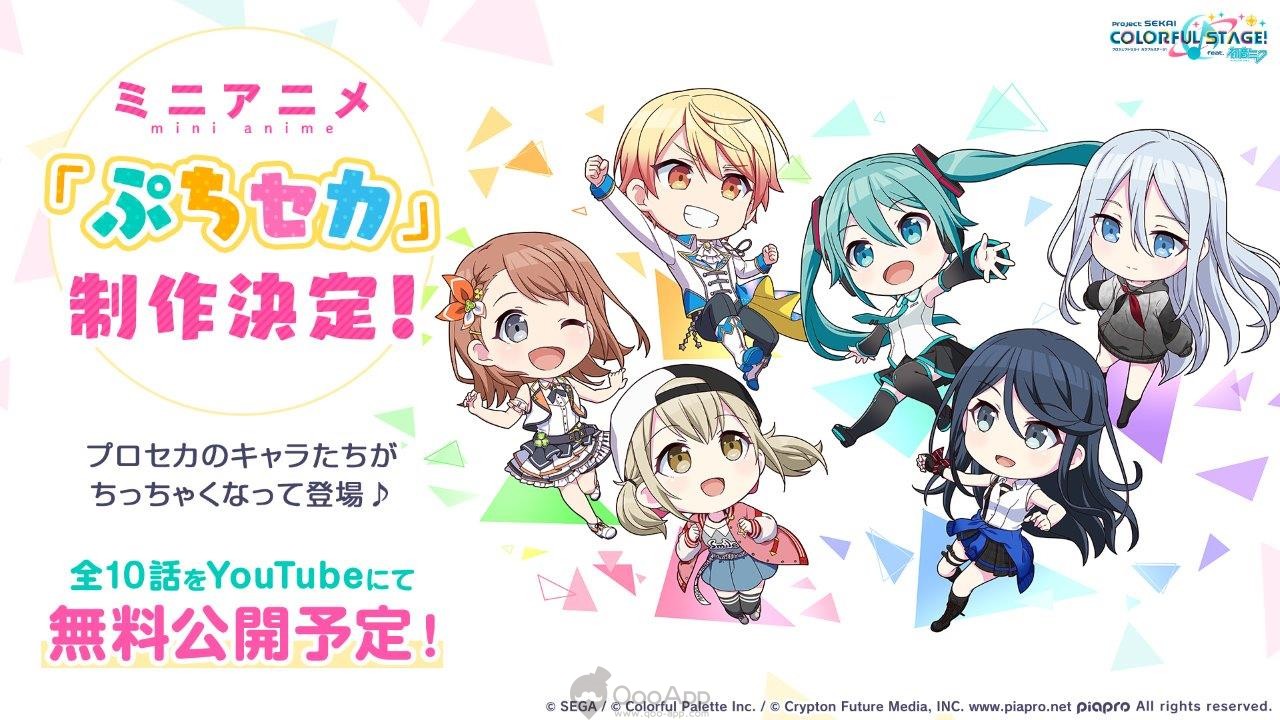