Bandai Namco Entertainment began streaming an announcement trailer for the Mobile Suit Gundam: Battle Operation Code Fairy game for PlayStation 5 and PlayStation 4. The video reveals that the game will launch digitally on November 5 with the first volume, which consists of episodes 1-5. The second and third volumes will launch on November 19 and December 3, respectively. Each volume contains five episodes. The video previews story, gameplay, and the opening theme song "Fly High the 'Fairy'" by Maon Kurosaki. 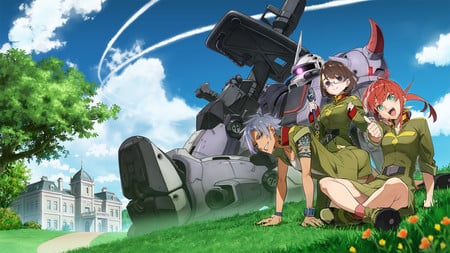 The single-player action game will be based on the Mobile Suit Gundam: Battle Operation 2 game. Masayoshi Tanaka (your name., DARLING in the FRANXX) is designing the characters. Kyoshi Takigawa (Gundam Breaker Battlogue) is handling mechanical design. Toshikazu Yoshizawa is in charge of directing, producing, and storyboarding.

The game will have both standard and deluxe editions. The standard edition will include all three volumes, 1-day early access to volumes 2-3, a PSN avatar set, a "Zanny [Ground Type]" unit, 100,000 in-game DP currency. The deluxe edition will include everything in the standard edition, as well as a High Mobility Zaku Ground Type (AS) unit, avatar costumes, marks, an operator, and 31 tokens for supplies. Customers who purchase either the standard or deluxe edition on November 4 will have early access to the game on that day.

The Mobile Suit Gundam: Battle Operation 2 game launched for PS5 in January and for PS4 in October 2019. 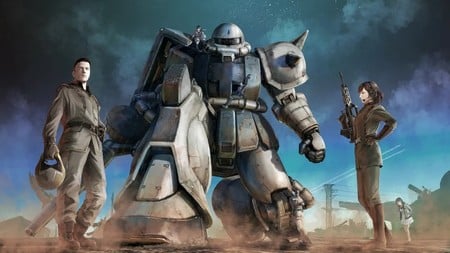 Mobile Suit Gundam Battle Operation 2 builds on the critically acclaimed land-based combat of its predecessor and takes the 6v6 action up a notch with all-new space-based battles. Infantry battles add a new dimension to the in-game combat, giving pilots the ability to take part in the fight alongside mechas, placing bombs in enemy bases or requesting support fire to help decide the outcome of the battle. Additionally, customizable Mobile Suits offer players the opportunity to enhance their favorite mecha through Development Points earned in battle.

Bandai Namco Entertainment released the game on the PS4 in Japan in July 2018.

Mobile Suit Gundam: Battle Operation was the first free-to-play game for the Gundam franchise. In the game, four to six players could join either the Earth Federation or Zeon Forces to play against each other. Players could not only pilot the giant Mobile Suits of the Gundam world, but could also attack enemies in vehicles or even on foot. The game launched in Japan for the PlayStation 3 in June 2012, and ceased operations in July 2017. A sequel game titled Mobile Suit Gundam: Battle Operation Next debuted for the PS4 and PS3 in August 2015, and ceased operations in March 2019.