Genshin Impact’s newest event, Shadow of the Ancients will run from from November 5 to November 15, 2021. This guide will cover all the things you need to know about this event, as well as tips on how to clear the mission and obtain the attractive rewards. 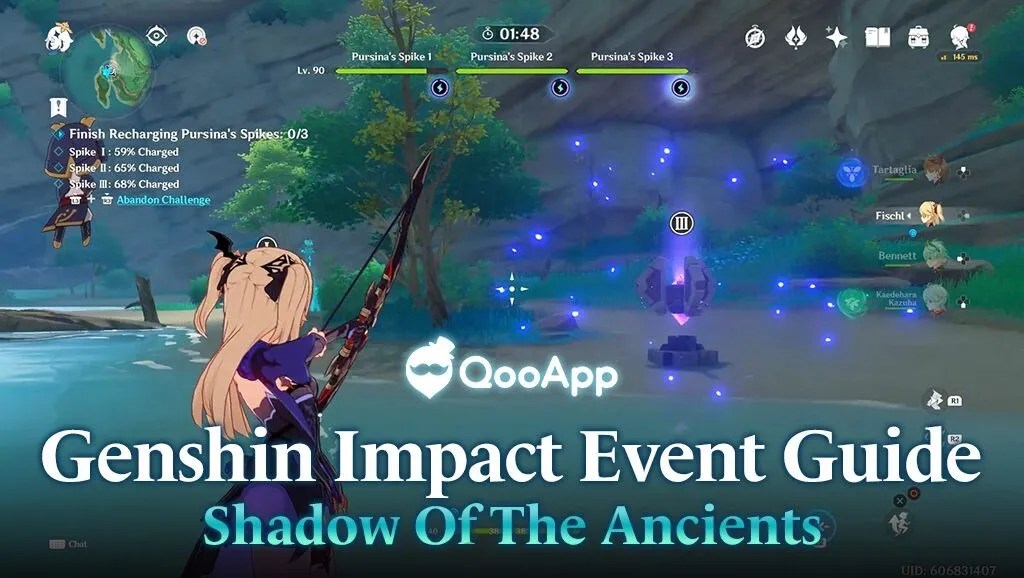 ▍How To Start the Event

The Shadow of the Ancients event has three phases with Phrase 3 available from November 9. If you want to participate the event, you’ll need to meet the following requirements;

As the event takes place in in Tsurumi Island, you’ll have to unlock this location before you start on your quest. The location can be found in the following map; 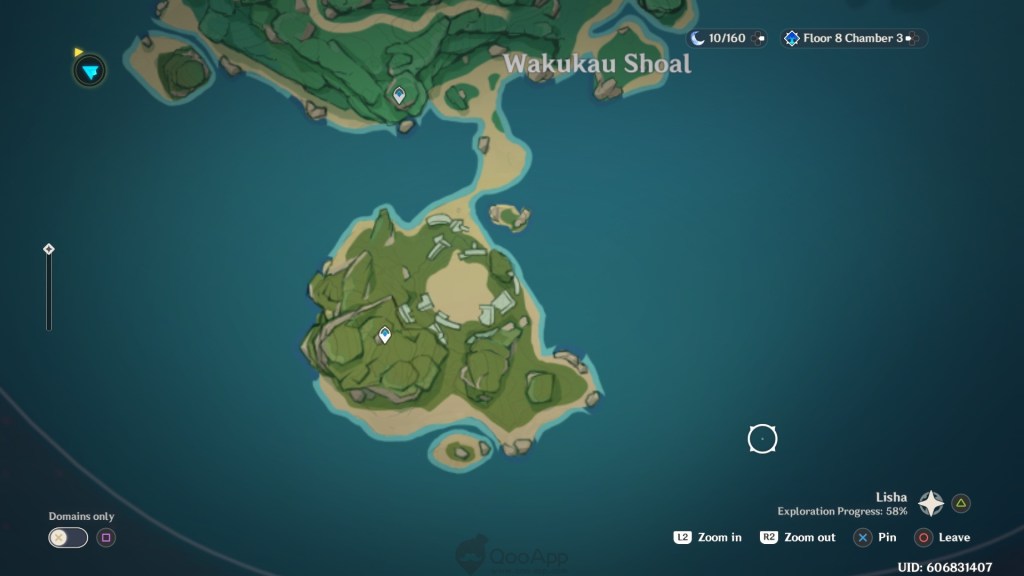 In order to freely explore the island, you must clear A Journey to Tsurumiworld quest. You don’t need to complete the seven-day quest chain per se, you must at least start it. Players that haven’t start the event will just get kicked off to a random part of the map, because of the thick fog the island has.

If you manage to meet all of the requirements listed above, all you need to do is go talk to Katheryne in the Inazuma Guild Counter (talking to Liyue and Mondstadt Katheryne NPCs will do nothing), who will mention that there’s a mission that is frustrating a lot of adventurers, involving a Ruin Grader that quickly revive itself even after being defeated.

With the help of Hosseini, a researcher from Sumeru, you find a way to disrupt the ley lines that support the self-healing mechanism of Ruin Grader. This plan is divided into three phases, and we will be explaining each of them below.

We’ll start by exploring four areas: Stormterror’s Lair, Yaoguang Shoal, Qingxu Pool and Tatarasuna. These are the main locations of the event, where you’ll be frequently visiting. Hosseini will give you a Gadget called Ayesha’s Chaos Prospector. You can equip it from your Adventurer Bag, and it is necessary you do so in order to continue the event. 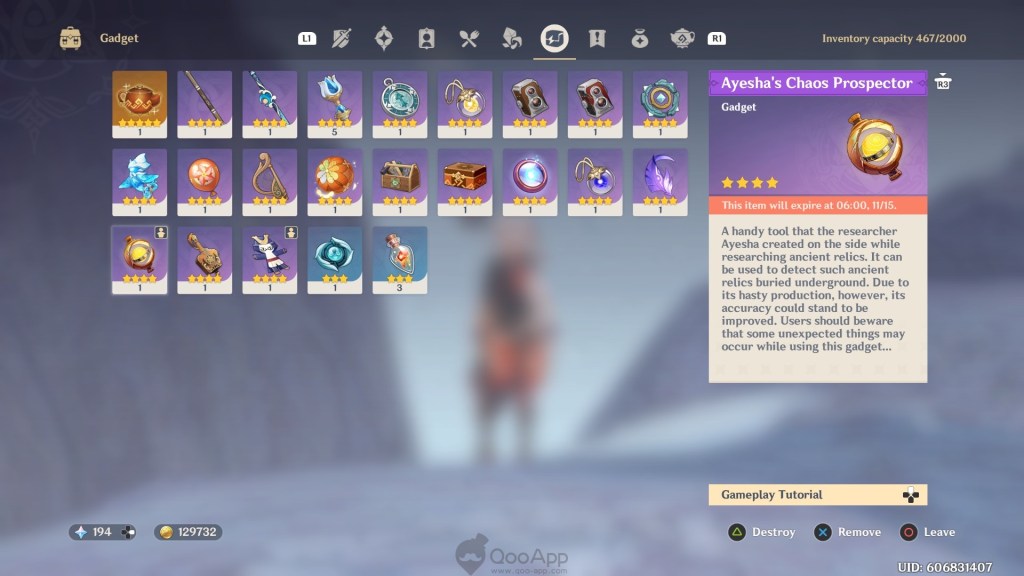 The investigation begins when you arrive the places charted on the map (you can easily view the exact locations from the event page). Your objective is to find the Conduction Component. To do this, place Ayesha’s Chaos Prospector by pressing the indicated control prompt, which varies depending on the platform you play. I recommend defeating all enemies in the nearby area before you proceed, as you cannot place the probe during combat.

Once placed down, the Prospector will shine a light indicating the general direction of where you must go. Up to three probes can be placed, and once you place a fourth one, the first one you’ve placed will disappear. If you reach the range of the target site, select “Check”. 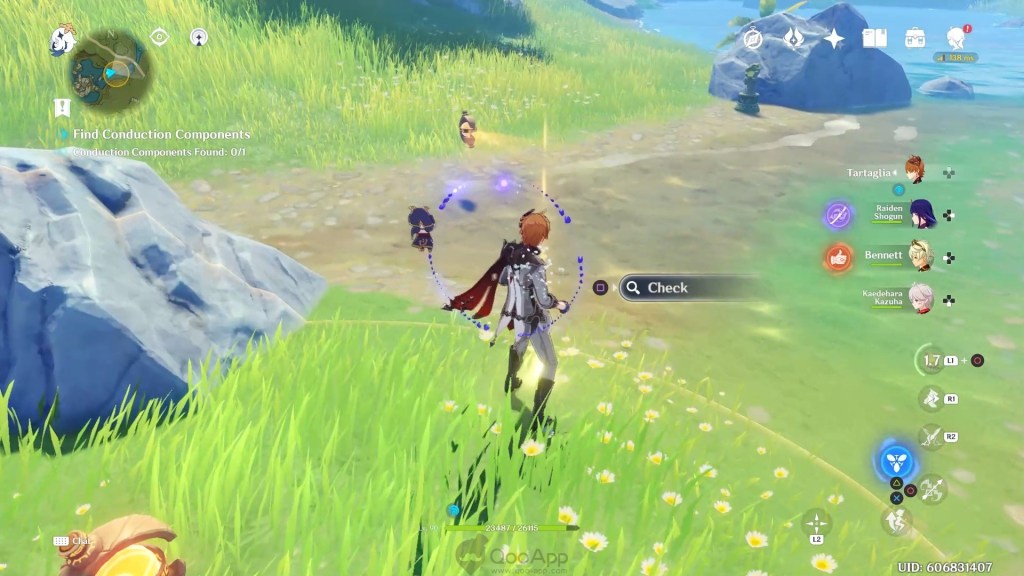 It takes a couple of tries to find the actual location, and here are the possible events you’ll encounter during your probing:

After obtaining all Conducting Components, we can move on to Phase 2. For every area you manage to fully probe, you earn Primogems and other useful items, which you can claim from the event page.

Once you’ve finished searching all four areas of the previous phase, speak with Hosseini once again and give the Conduction Components to him. For the second part of the plan, we will need to restore the energy to monuments known as Pursina’s Spikes. By absorbing the energy in the four places mentioned previously, they will be able to disrupt the healing power of the Ruin Grader. 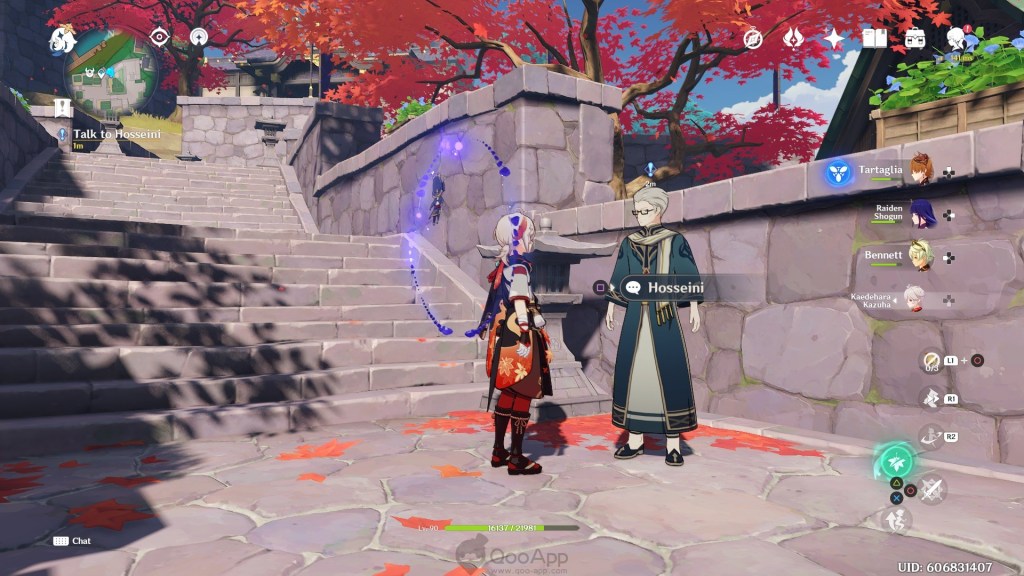 There are three Spikes in each of the four Survey Sites. The challenge begins as soon as you interact with the activation pedestals we’ve uncovered in the previous phase.

The Challenge requires you to use Electro Attacks to charge the Pursina’s Spikes within the time limits.

It isn’t easy, however. As the Spikes begin to recharge, they’ll alert and attract enemies, which disrupt your attempt. You must defeat all the enemies, while keeping an eye on how much Electro energy remains.  It takes around 100 seconds to fully charge a spike. The challenge is considered Failed if but one of the Spikes’s Integrity hits 0, or if the three-minute time limit runs out. 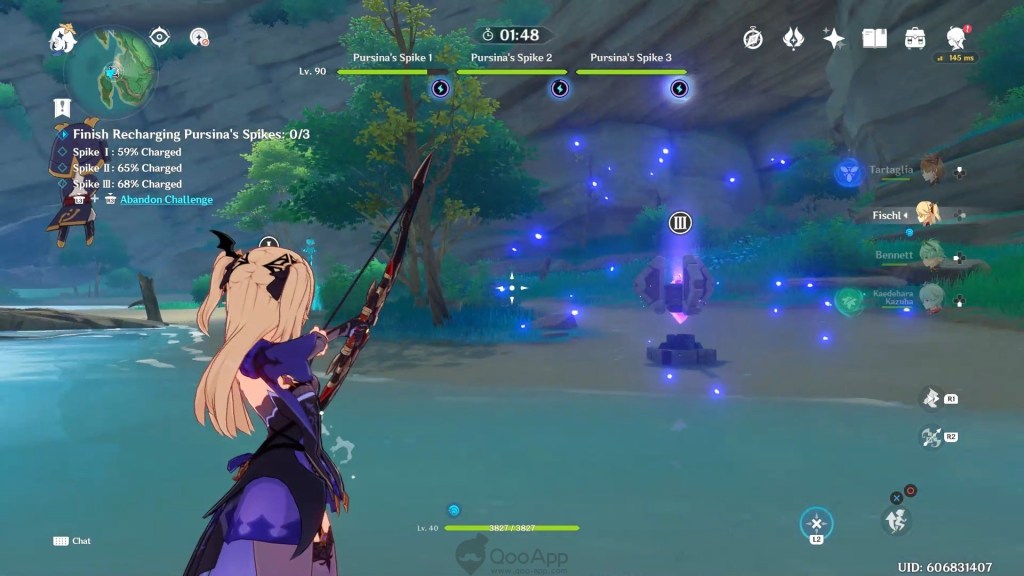 I suggest using your strongest archer, such as Fischl, or Kujou Sara. Both of them can shoot from a considerable distance, which can allow you to continuously charging the Spikes without getting too close to the target. Fischl can be obtained as a 4-star in the gacha, or if you’re a veteran player, you might’ve obtained her as a free copy.

If you clear all four areas in both Phase 1 and 2, two optional survey sites will appear, giving you additional rewards. But it won’t obstruct you to proceed forward if you give it a pass.

To begin Phase 3, speak to Hosseini, who will mention that he managed to fix the Spikes required to finally defeat the invincible Ruin Grader. 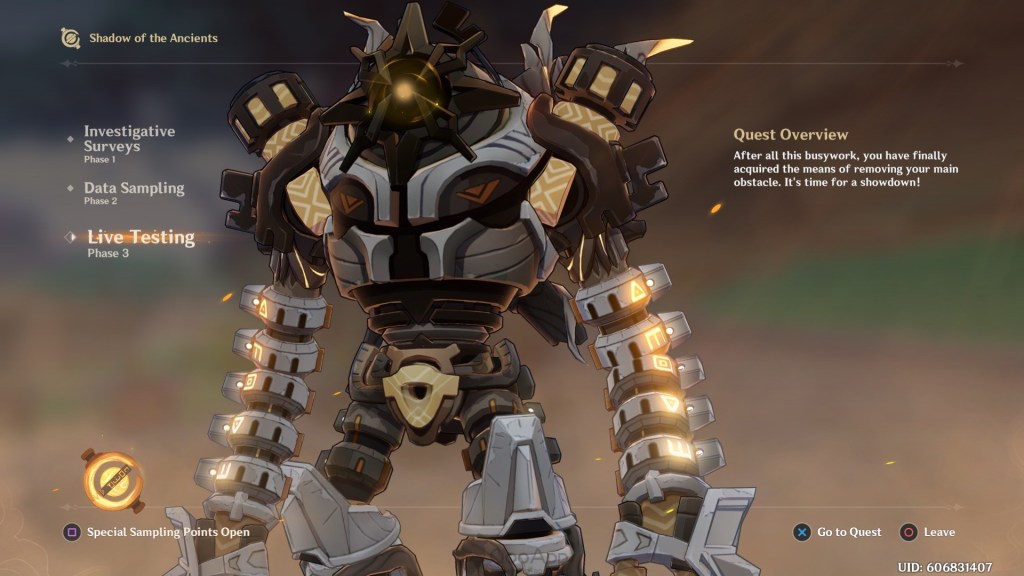 First, head over to the location where you first fought Ruin Grader. Then, use Ayesha’s Chaos Prospector and place the Spikes in their correct places. Once all three spikes are ready, talk to Hosseini again. 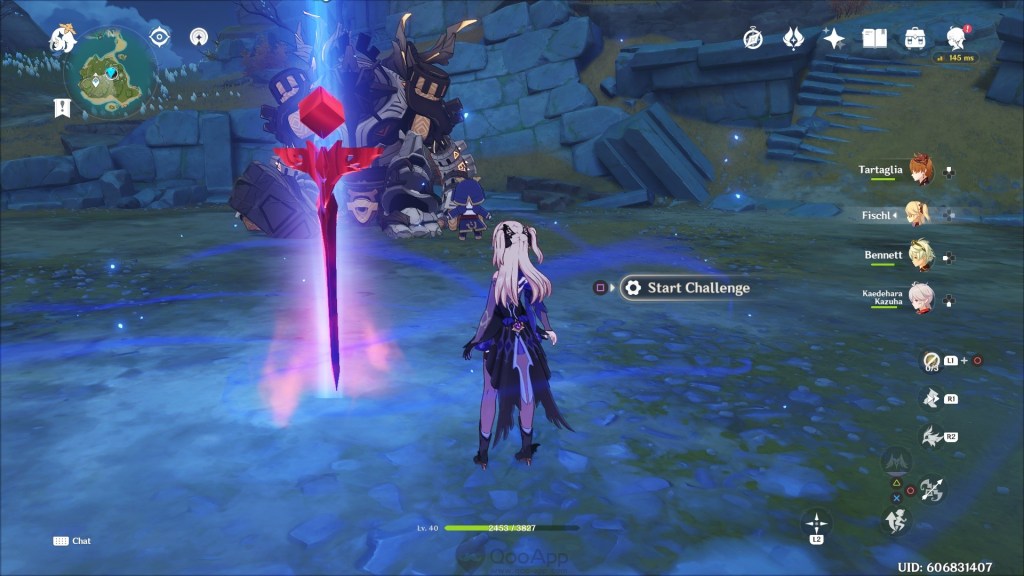 After speaking to Hosseini, it’s time to face off the Ruin Grader. In this battle, there are certain things needed to pay attention to. For instance, if you activate three spikes at once, the Ruin Grader will gain a considerable buff to its Attack and Defense stats.

However, if you can aim at the glowing spots (weakness) in both of its legs, you can stun it for a brief time. Use that time to charge Pursina’s Spikes, just like what we did in Phase 2. And the objective is to charge all the spikes, not defeat the Ruin Grader.

This is because even if you manage to deplete the HP of the Ruin Grader, all that will do is make it enter its self-healing mode. Thought it will make it unable to move for a limited time, the mode will bring its HP back to maximum.

And just like Phase 2, enemies will constantly spawn, and the challenge will fail if any of the three spikes gets destroyed. The Ruin Grader will also lock on one of the spikes (at random, there is no pattern) and shoot a laser attack at it, but you can stun it by shooting the glowing spot at center. 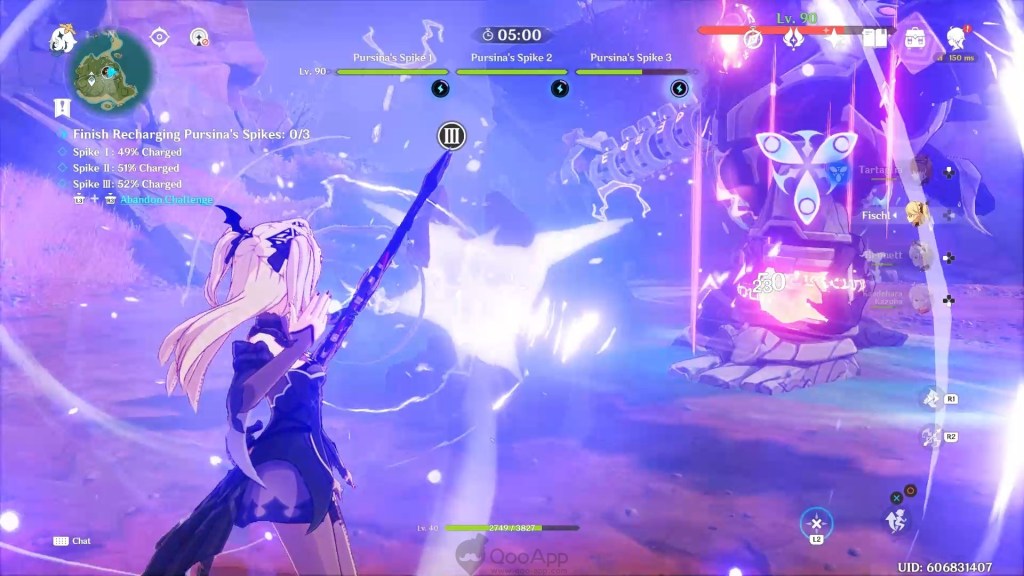 And that’s it! If you managed to get through these challenges, you have now completed the Shadow of the Ancients event! Don’t forget to go to the event page to claim your rewards. We hope you enjoyed this brief event guide will help you complete all the challenges!