DanMachi – Memoria Freese (DanMemo), the mobile RPG based on the hit fantasy series “Is It Wrong to Try to Pick Up Girls in a Dungeon?” (also known as DanMachi), is celebrating the fourth anniversary of its Japan release with the original story “Aedes Vesta,” fully produced by Fujino Omori, the author of DanMachi. The event is already available in-game! 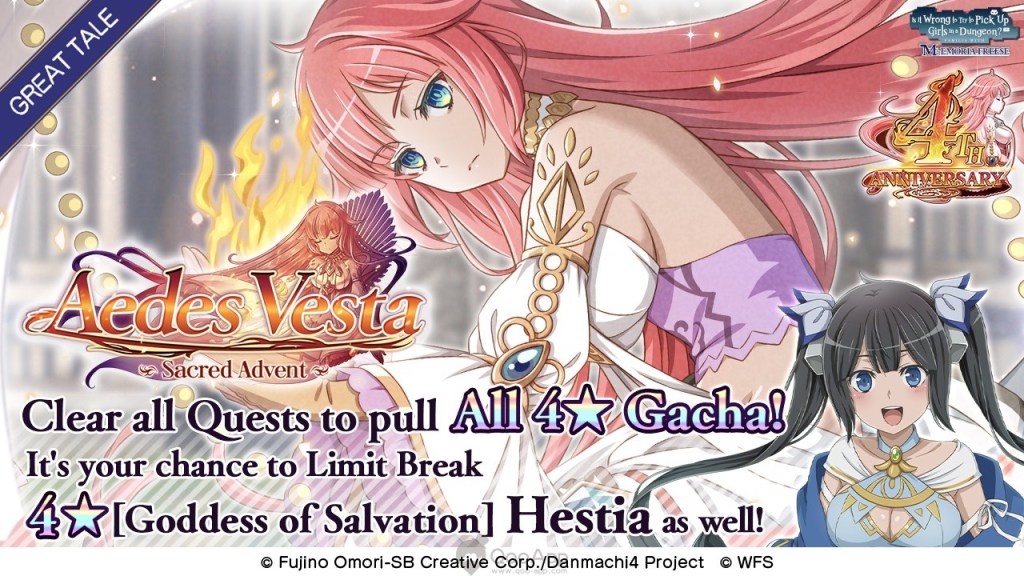 “Aedes Vesta” is a DanMemo exclusive story fully produced by the author of DanMachi, Fujino Omori, and is the largest event in the history of DanMemo that transcends Great Tale Astrea Record which was released to celebrate the third anniversary. The first part of the trilogy has been released today, June 17th (PST). The story is a must-play for DanMachi fans, and it features characters that have yet to appear in the anime series.

The land was called Olympia: the Eternal Sanctuary

A goddess and her familia members were invited to this secluded land
The resolution of a tale of the god is about to begin, as promised since ancient times― 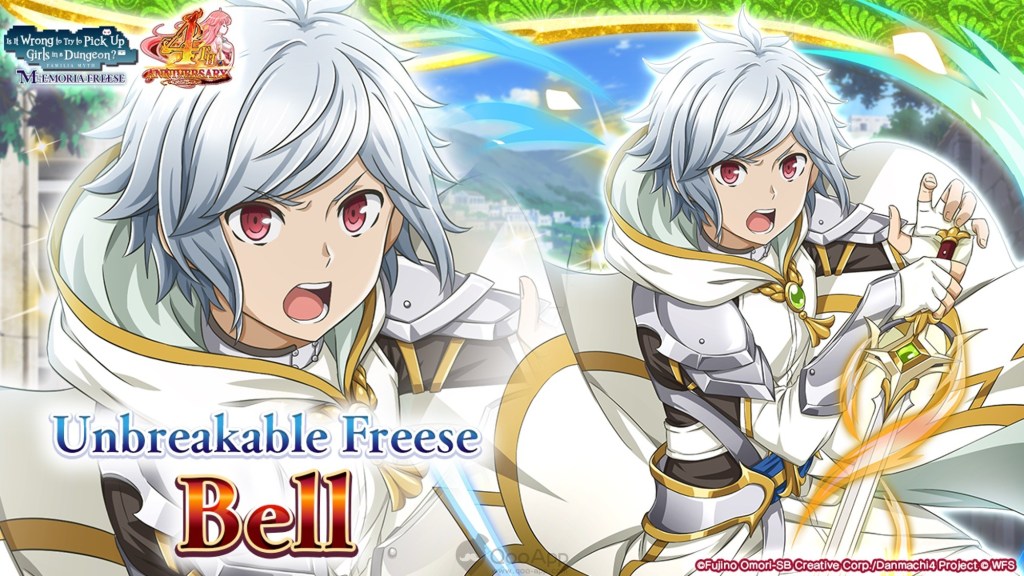 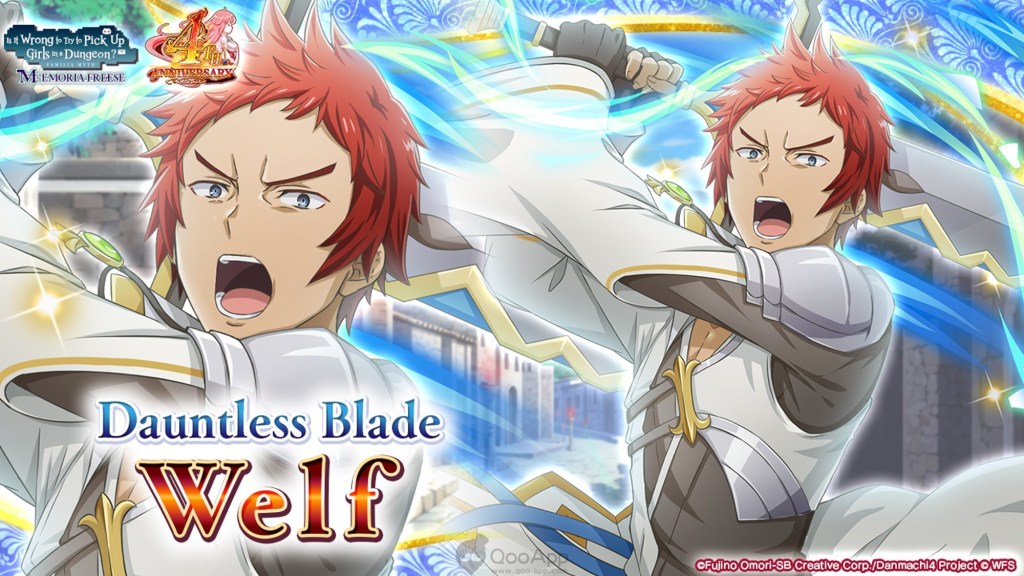 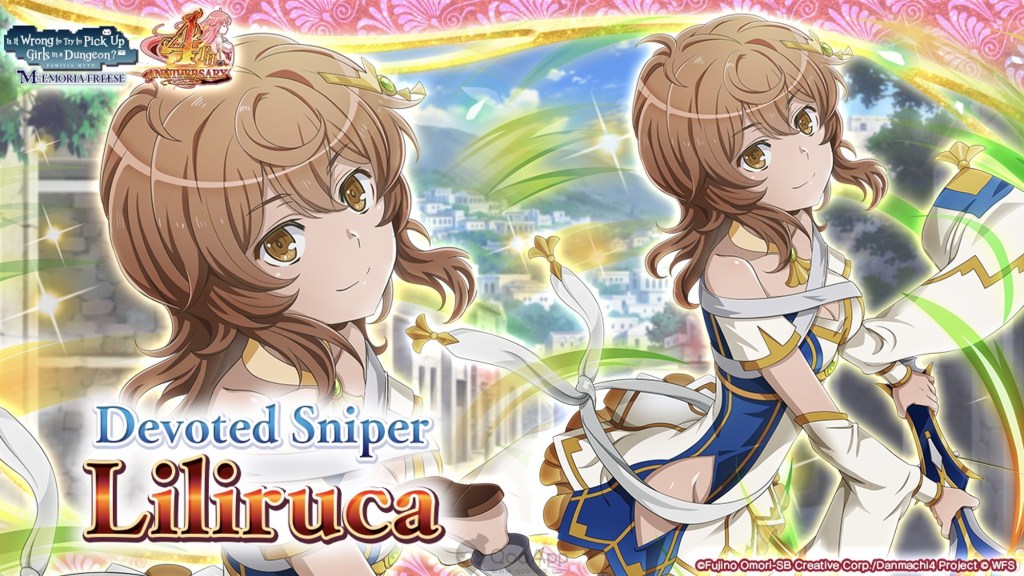 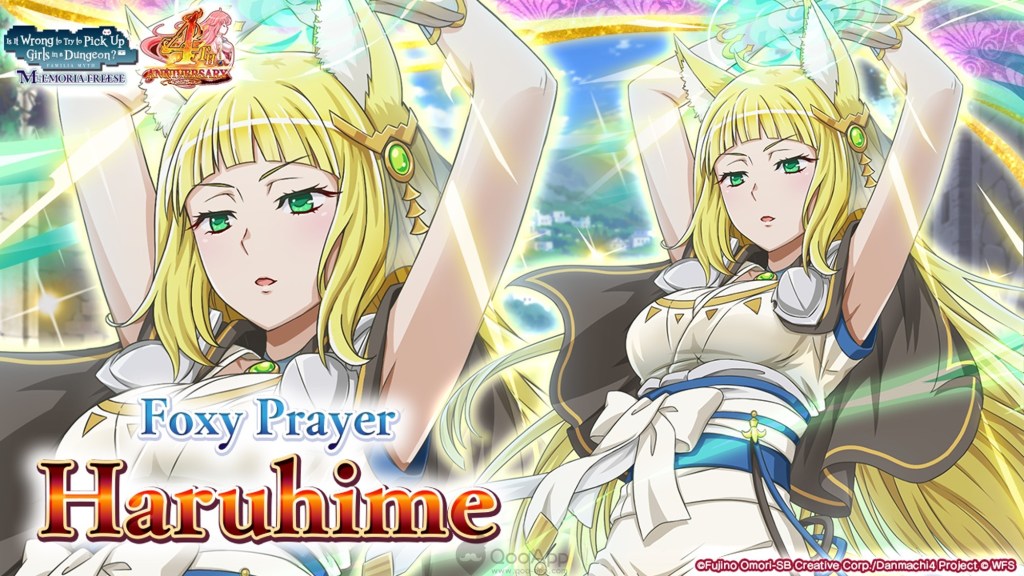 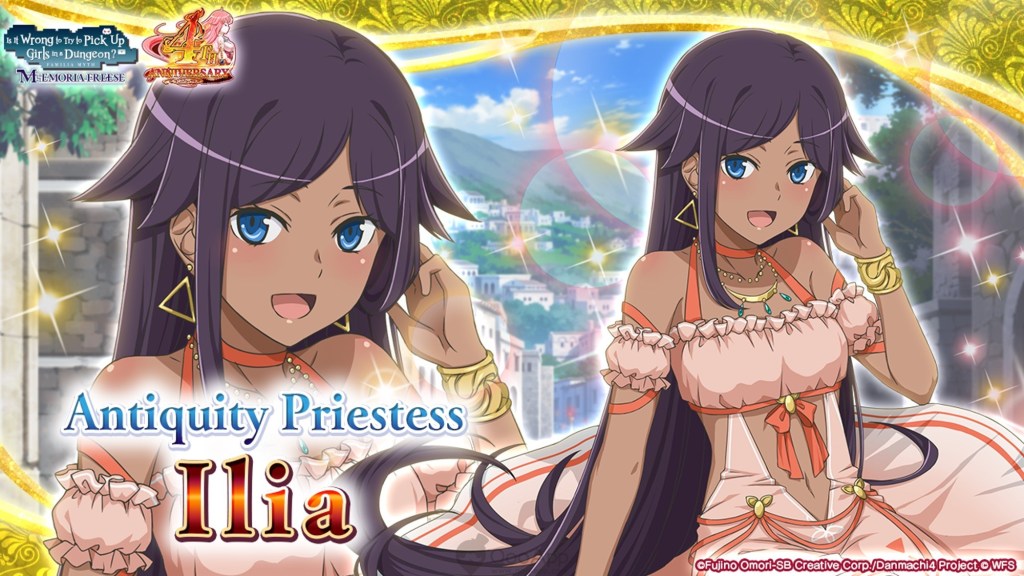 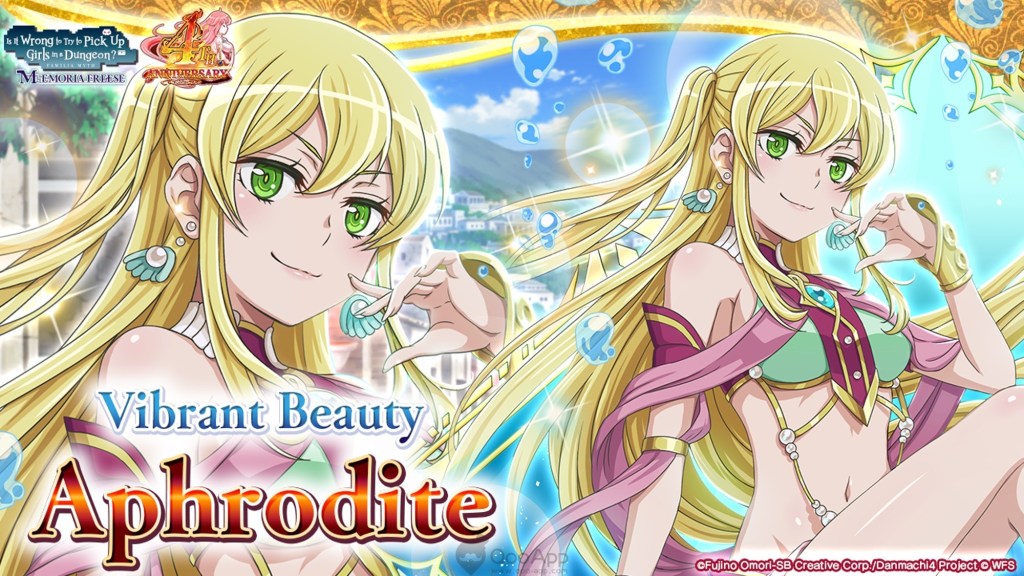 ▍Log in to get 4★ [Goddess of Salvation] Hestia!

To celebrate the anniversary, all players who log in during the campaign period will receive a 4★ [Goddess of Salvation] Hestia Unit. 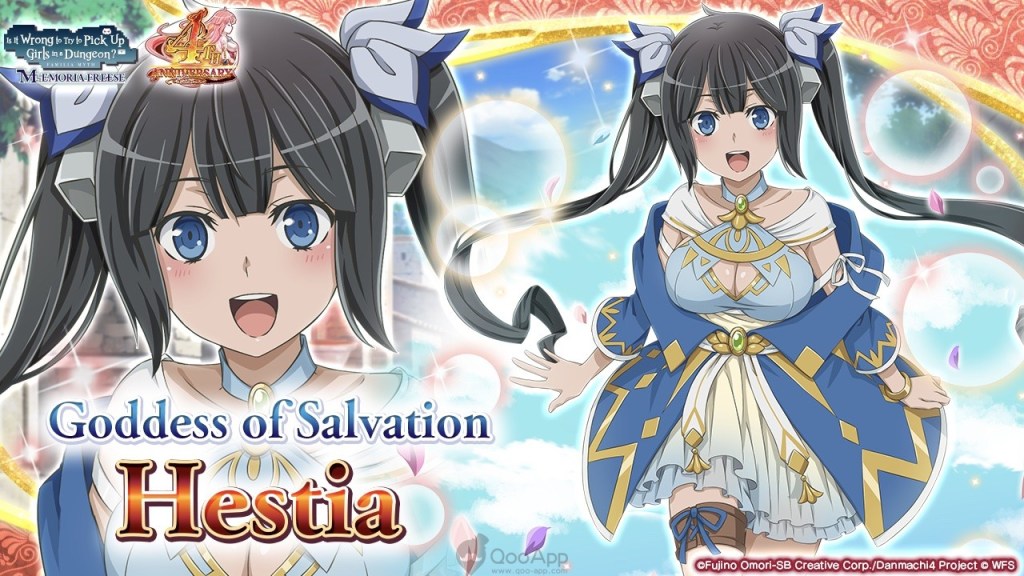 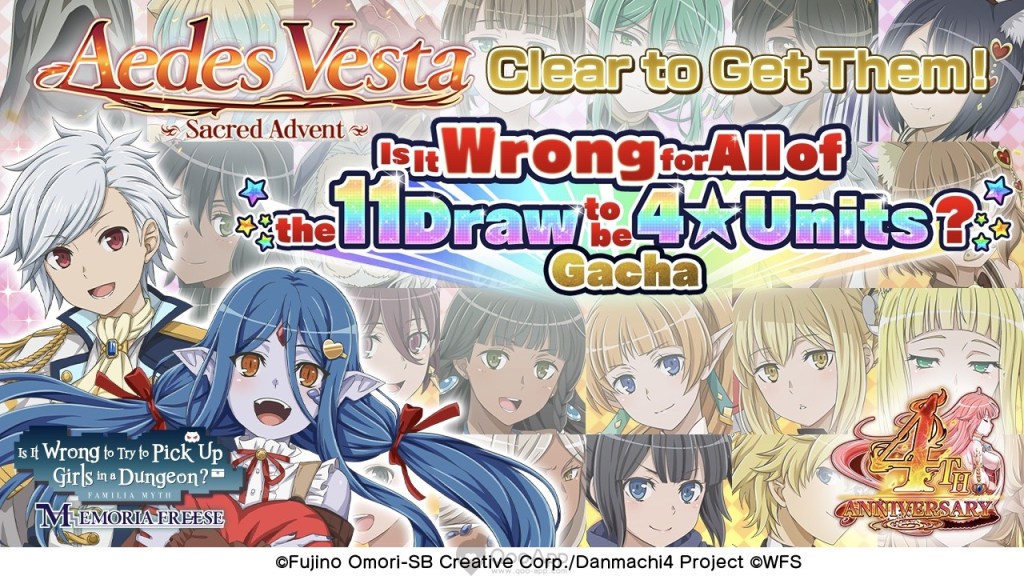 By clearing the Great Tale Aedes Vesta -Sacred Advent- on Normal, players can get a gacha ticket for Is It Wrong for All of the 11 Draw to be 4★ Units? Gacha.

This 11 Draw Gacha can be drawn only once by using a ticket, and all 11 slots of the gacha are 4★ Unit guaranteed. 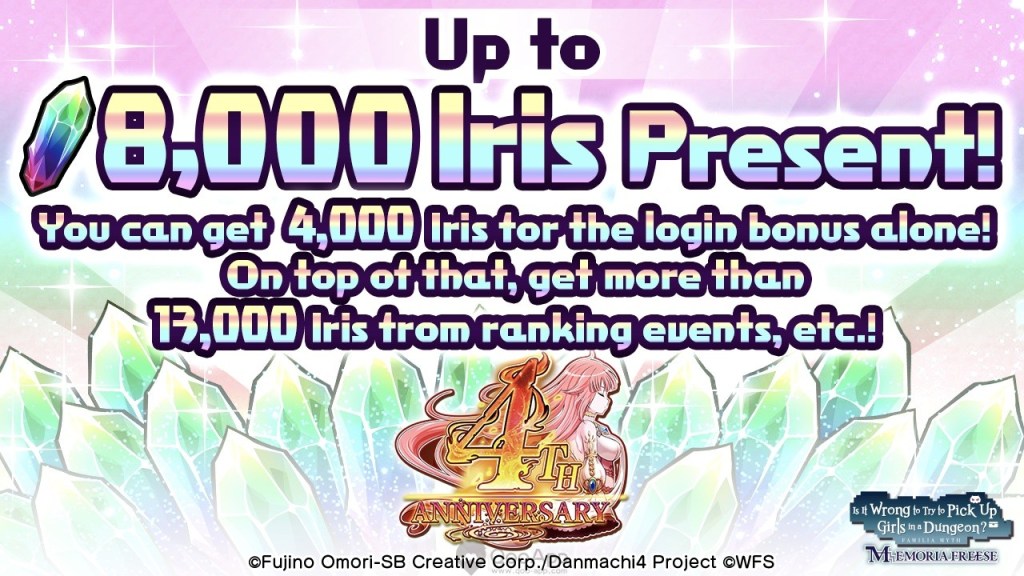 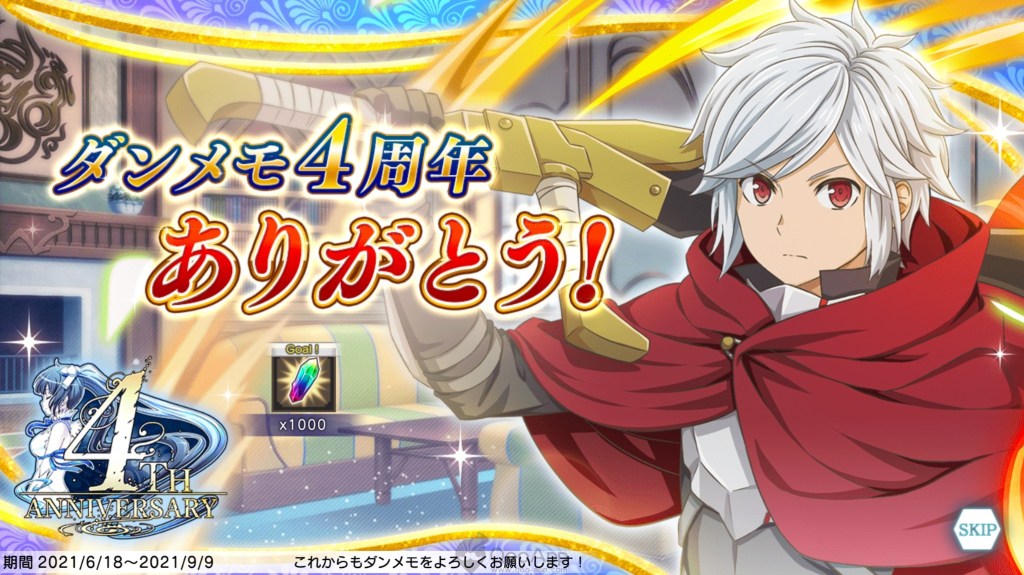 To learn more about other events that grant free Iris, please see the in-game notice.

*Each campaign and event have different periods. Please see the in-game notice for details.

To celebrate “DanMemo’s” (JP)4th Anniversary, the Free Daily 11 Draw Gacha Campaign will be held. Since it’s the 4th anniversary, it’s going to be held for up to 40 days, the longest in the history of DanMemo!

During the period, players get to pull up to 440 Draws for free!

In addition to the above campaigns, there are twelve campaigns in total such as the “Up to 44,444,444 items! (JP)4th Anniversary Tons of Items Quest,” “Aedes Vesta Gacha! 4★ Unit Rates Doubled!” and more. For more details check out the in-game notice.